I work at Hunton & Williams Miami; hear me roar 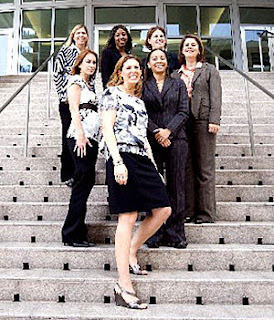 Here's a Miami Herald article about how law firms are trying to find creative ways to keep women lawyers. Above is the picture from the article with a bunch of lawyers from Hunton & Williams: "Hunton & Williams law firm is moving toward more flexible schedules to appeal to women. From left are: Allie Hernandez Pennie, Grace Mora, Jennifer Ellis, Barbara Alonso, Laurie Uustal Mathews, Davina Figeroux and Ellen Ross Belfer."

Because the picture is of Hunton lawyers and because of the caption, I read the article looking for the creative ways the firm is appealing to its women lawyers. But this is the only mention in the article:

Grace Mora, a Miami labor lawyer, participates in Hunton & Williams' Women's Networking Forum. She believes her firm is moving in the right direction. ''I think it takes time to get the word out there. '' She also believes flex scheduling is evolving from a perk to becoming part of the firm's culture. ''We're not 100 percent there, but we are moving in that direction.'' But Mora says it's not just women who want it, ``men are demanding it too.''

Ah well.... At least the picture is cool.

The article does detail the drop of women applicants to law schools:

What say you, Miami readers -- are there any firms doing cool things to keep women lawyers?
Posted by David Oscar Markus at 9:44 AM

They may be trying things to keep women around, but not necessarily the right things. For instance, every time I ask someone in an interview about their woman's program, or whatever let's all hug support group they have set up, I get a very stiff and awkward response that sounds like "It's ok if you have babies! We like babies!"

I think the firms need to take into consideration that yes, raising a family is a high priority on lots of female lawyers minds, but not all of them. There are other pro-female initiatives they could consider.

Query: With the way things now stand, could the picture be filed with pleadings in Federal Court in our district?

I think someone could describe the picture as vulgar.

Does anyone know of a law firm that has instituted a mens' program?

JUST BECAUSE THE MIAMI HERALD WASTES SPACE WITH NONSENSE ARTICLES DOESNT MEAN YOU HAVE TO DO THE SAME. THIS STORY IS RIDICULOUS JUST AS BIG FIRM PRACTICE IS.

More superficial legal coverage from the Herald. We should be used to it by now.