Playboy and the Padilla trial

This blog has covered Playboy and the law in the past.

Now Playboy has been mentioned in the Padilla trial (via the Miami Herald):

The Jose Padilla terror trial turned light for a moment on Tuesday when a defense lawyer attacked the credentials of a government witness while questioning him about his post-9/11 interview with Playboy magazine.

Attorney William Swor lost his bearings as he tried to ask international terrorism expert Rohan Gunaratna about a passage in the November 2002 interview.

''You were not the centerfold,'' Swor quipped, as the dozen Miami-Dade federal jurors laughed.

''It's very important that it was the article on terrorism,'' countered Gunaratna, a Singapore university professor who was born in Sri Lanka. He said he had explain to his mother that former President Jimmy Carter had once done an interview with the "dirty magazine.''

Swor finally got around to asking Gunaratna what he meant when he told Playboy that sometimes the U.S. should ''terminate'' clandestine agents when ''black ops'' run their course. Swor insisted it was a ''euphemism'' for ``kill.''

And here's the AP:

Swor repeatedly probed Gunaratna's credentials and previous testimony for inconsistencies. At one point, Swor brought up a November 2002 interview Gunaratna gave to Playboy magazine for a terrorism article in which he criticized the U.S. for being unwilling to "terminate" undercover operatives if things go bad.

"It means you don't work with them any longer," Gunaratna said.
Swor responded skeptically. "You're not just going to give him a pink slip and say, 'See you around,'" he said.

In one of the day's lighter moments, Gunaratna said he wanted the record to show that the Playboy article was on terrorism and had no connection to pornography.

"They might be wondering if I posed naked for Playboy," Gunaratna said, adding that he had a difficult time explaining to his mother how he wound up in the magazine.

Ah, yes. I'm sure the jury was wondering if Gunaratna posed naked for Playboy because he looks a lot like Oona O'Connell.

I hope the jury doesn't get any ideas for dress up from the Playboy mention.

I think the most interesting news is that the Government is set to rest by the end of the week. I wonder how much of a defense there is going to be (if any). 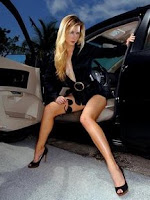 Okay, okay, here's another picture of Oona (which we got from Abovethelaw).
Posted by David Oscar Markus at 7:52 PM

Am I the only one noticing that this blog and the author are developing a fixation on the..shall we say racier or risque side of the law?

Rumpole, why don't you pull the Cock (please see related post on this blog) out of your...mind.