Magistrate Judge John O'Sullivan officially retired today, after serving on the bench since 1999 (before that, he was a prosecutor, where he led the Court Broom case).

One of the good guys on the bench, that's for sure.  Despite COVID, there was a nice reception for him at the Ferguson building this afternoon.  Judge O'Sullivan was drinking from a huge mug of beer with ice.

My selfie game wasn't on point though: 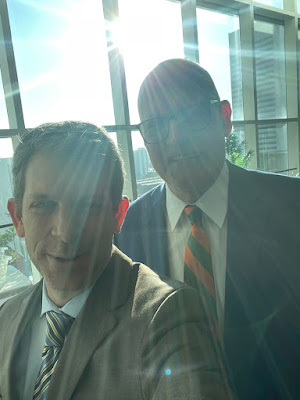 I hold John in the highest esteem as both an AUSA and a Federal Magistrate. I was privileged to have tried many federal cases against him including Court Broom. A great lawyer and a great guy. I wish him the very best in his retirement.

I’m going to miss that Bahstahn accent. Was always music to my ears. Godspeed John.

Btw talk about heavyweight championship fights. Bronis/O’Sullivan in courtbroom was the best. I think it was Stephen who represented Judge Shenberg who dumped 50 or 100,000 cash on a table before the jury in opening argument for an entrapment defense. Courtroom theater at its best with two of the best going at it.

Smart. Fair minded. No pretense. Funny. Judge O'Sullivan was an excellent Judge and will be missed.

A pleasure to appear before.

Thanks, Rumpole @ 9;17 am. – Indeed, John O’Sullivan masterfully lead the Government team in prosecuting the Court Broom case. And yes, I did represent Harvey Shenberg. But there was also a “Hall of Fame” cast of defense attorneys representing the co-defendants. Jay Hogan on behalf of David Goodhart; Alcee Hastings for Phil Davis; Ed O’Donnell and Ed Carhart for Al Sepe.

John O'Sullivan was a IRS Special Agent before hw g=got his law degree,

Great and consistent judge, but now i can officially retire my chess clock for jury trials. The tie is a nice touch as were all the mementos from the various places visited around the world

Rarely appeared in front of John as a lawyer, but knew him on a personal level and he was/is a class act the likes of which I’ve rarely seen in 40 years of practice. Great, great guy, fun to be with, great reputation as a prosecutor and then as a judge, etc. Don’t think I’ve ever heard a negative comment about him, which also says a lot. Wish I could reveal my identity on this one, but I’m guarding it more closely than even Rumpole, lol. This may sound cliche, but the federal bench truly suffered a loss today. You will be missed by many, John. Enjoy retirement, you’ve earned it !!