When I was a boy, “social media” meant mostly getting together to play baseball and football, the primary “platforms” of our interactions with our peers. We played endless games on our suburban streets, in our connected backyards, in neighborhood parks and even – when local school officials were insufficiently attentive to the locks on their gates – on actual ball fields. If we had enough kids – and at the tail end of the Baby Boom, we often did – we’d play 11-on-11 or 9-on-9 as the season demanded. If too many kids were sick or grounded or on vacation, we engaged in endless personnel adjustments to make the games even. Somebody might be the designated quarterback for both sides. Or the hitting team might provide its own catcher. But there was one position that was never filled: No one was going to waste valuable playtime being the referee or the umpire. 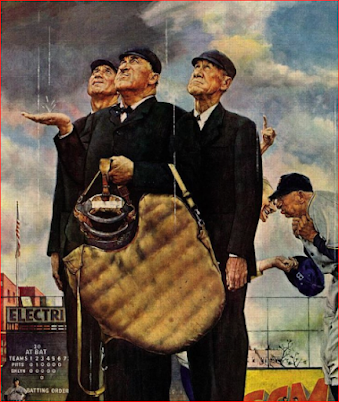 With the exception of the occasional squabble, our honor system worked a treat. If you stepped out of bounds (that is to say, into Mrs. Scheimann's yard), you stopped where you were. If you missed the tag before Billy Miller made it to the back corner of the Buick, you said so. And if too often you didn't, you were subject to the ultimate sanction: Kids who couldn’t be counted on to call it square – on themselves most of all – found their doorbell stopped ringing, because nobody cared if Mikey could come out to play, if Mikey was a cheat.

No one wanted to be the referee, or imagined he had the authority to appoint himself the umpire, but we knew that – at least as measured over the course a summertime baseball season – we had no need of an umpire, because we were all smart enough to sort out balls from strikes, to distinguish the salient truths from the possible fictions.

Not long after those idyllic days of my suburban youth, I was a newspaper reporter. Full of the glories of Bly and Sinclair and Mencken and Woodstein, I was determinedly certain that the Fourth Estate was the key element required for a healthy republic. Over the years, writing and participating in the production of thousands of stories, we mostly got it right. And when we didn’t – when the angry subject of a story called to tell us so, or when more reporting revealed our error – we’d run the correction.

We tried to get it right not merely because getting it right was the right thing to do. No lofty J school platitudes were necessary, nor would they have been sufficient for our readers to trust us. Rather, our bosses’ business models depended on us getting it right, and our jobs depended on serving our bosses' business models. No publisher was long going to employ a reporter who generated too many corrections, because no reader wanted to read a paper that got it wrong, and no advertiser wanted to advertise in a paper that no one read – and no publisher wanted to run a paper that couldn’t make money.

Thus was the circle of accountability drawn (with the assistance of the paper across town, back when towns of any size had more than one paper, ever-eager to call out our mistakes).

But there still were no referees – at least not outside the jury in a libel trial, if you got it that wrong.

Part of the process of getting it right was fact checking. Yes, even back in the prehistoric era when the signature sound of the newsroom was a clattering teletype, and you could smoke at your desk, we had fact checkers. Smaller publications gave the task to someone in the newsroom without a pressing assignment in the moment. Large publications, especially periodicals with long lead times, often employed folks whose entire job it was to run down everything the reporter put into the story and confirm its veracity: “Sheriff Gilbert, our reporter Robert Kuntz visited with you Tuesday for an interview about the new civilian oversight committee. Did you in fact say. ‘I’m the law in this county. I’m the law. Me.’” If the sheriff, hearing his pronouncement in the voice of another, had reason to wish he hadn’t said what I said he said, he might denounce the quote to the fact checker. Then the fact checker came back to me and vetted the details. He asked to see my notes or to listen to the tape, and then made a call – subject to appeal to an editor – about whether the quote would be published or not. [Sheriff Gilbert said exactly that, by the way. I had the tape. We ran the quote.]

But like the call on whether Johnny Newman had crossed the line between the maple and the birch trees that demarcated the end zone, the fact checking process took place among the players.

Today’s professional “fact checkers” operate in an entirely different system. They sit outside the organizations they monitor, apart from the writers – professional journalists and casual Twitter tweeters alike – and they rarely if ever consult those writers or speakers before rendering their unappealable judgments: “Misinformation.” “Misleading.” “Lacks context.” “Disputed.” “Partly false.” Those judgments are then executed not merely with the generation of a correction, but often by disappearing the offending story entirely. More than that, with the flip of a switch, today’s fact checkers can silence not only the story but the story teller, and not only from a single platform, but from practically all of them.

Which might be alright, I guess, if fact checkers were selected from human stock inherently more trustworthy and less prone to bias or self-interest than adolescent ballplayers or small town reporters. But they, predictably, aren’t. And it might be alright if it didn’t turn out – as it, predictably, has – that "independent" fact checking has a business model of its own.

So when the limits of discourse are imposed from without, by the diktats of folks who make their living drafting those diktats, might it be time at least to ask qui bono?

In this month’s Harper’s Magazine, Joseph Bernstein (who, without irony, is described as a “Senior Report at BuzzFeed News”) does just that in his article “Bad News: Selling the Story of Disinformation.” In exhaustive, troubling detail, Bernstein examines the ways in which politics, culture, commerce, and technology have intersected to weaponize “fact checking” into the ultimate political power tool. (And Bernstein goes a long way to dismantling the comfortable rationalization and rhetorical off ramp that, since none of this “private action” falls under the ambit of the First Amendment, it is no legitimate cause for concern.) The piece should be required reading for anyone with even a passing interest in participatory democracy in the Twenty-first Century.

Back in the day, if one of our gang had volunteered for the job of umpire, and especially if he’d done so every time we got together to play, and most especially if he'd figured out how to fund his baseball cards and sodas by doing so, we would have been profoundly dubious, we'd have had a chat with him about his motives, and we would have kept our collective eye on how he was calling the balls and strikes.

Whatever you think of the President immediately preceding the current one, it’s probably worth at least asking if a system that bans his narcissistic, blustering bombast but platforms terror organizations’ manifestos is entirely in balance. One might, it seems, reasonably wonder if silencing every slightly heterodox voice giving consideration to something as staggeringly complex as managing a global pandemic is the very best way to vindicate the once sacred notion of a marketplace of ideas. And so on to a score of examples more or less daily.

It's a precept so old Juvenal asked it in Latin, and so timeless it's the title of a Star Trek episode: As Bernstein's piece conclusively demonstrates, barest prudence demands we pay attention to who exactly is doing the banning and the silencing and why.

PLEASE PLEASE PLEASE bring Markus back. When did this blog move from SDFLA news to rantings of Kuntz/Reizenstein? Oh brother.