Lots of great coverage around the web today of the closings in a packed courtroom.  It sounded like Apple took the show in openings, but Samsung seems to have had a great closing.  From Reuters:

Samsung attorney Charles Verhoeven countered by saying consumers are not confused between the products from the two mobile companies. He urged jurors to consider that a verdict in favor of Apple could stifle competition and reduce choices for consumers.
"Rather than competing in the marketplace, Apple is seeking a competitive edge in the courtroom," Verhoeven said. Apple thinks "it's entitled to having a monopoly on a rounded rectangle with a large screen. It's amazing really."
...
Samsung's Verhoeven said Apple had not shown any evidence that consumers were actually deceived into buying Samsung products instead of the iPhone or iPad.
"Consumers make choices, not mistakes," he said.

Apple had this to say in its initial close:

Apple attorney Harold McElhinny urged jurors to consider the testimony of a South Korean designer who said she worked day and night on Samsung's phones for three months.
"In those critical three months, Samsung was able to copy and incorporate the result of Apple's four-year investment in hard work and ingenuity - without taking any of the risks," McElhinny said.
Apple is seeking more than $2.5 billion in damages from Samsung. An Apple expert said Samsung earned 35.5 percent margins on the phones in the lawsuit from mid-2010 through March 2012, on $8.16 billion in U.S. revenue. Samsung has disputed that figure.
...
McElhinny focused on a meeting between Samsung and Google executives in February 2010, where Google asked Samsung to stop imitating the iPad so closely.
"Samsung executives chose to ignore that demand and continue on the path of copying," he said.

And from Apple's rebuttal (via ArsTechnica):

The contention that Apple doesn’t want to compete is "startling… and it is wrong," said Bill Lee, the Apple lawyer who delivered a final rebuttal.
"No one is trying to stop them from selling smartphones," he said. "All we're saying is: make your own. Make your own designs, make your own phones, and compete on your own innovations."

Samsung had to address damages (via C|Net):

A topic for both companies was damages, an amount that varies wildly depending on which expert you listen to. Apple's asking for $2.75 billion, while Samsung's targeting Apple for around $519 million. Verhoeven once again made the case that Apple had grossly overestimated.
"$2.75 billion in damages? Really?" Verhoeven asked. "What does it take to get a certified damages expert to agree with you on that?"
"We don't think Samsung should have to pay any damages," Verhoeven countered. "We don't think we're liable, but we have to address the issue of damages because this is the only chance."
Verhoeven pleaded with jurors to use "common sense" if they were to assign damages, going with Samsung's much smaller $22 million tally. Along the way that included taking a crack at Apple's methodology, which included spending $1.75 million on a program to calculate everything together.

I thought this live blog coverage from the Verge of the closings was fantastic as it had tons of quotes and actual exhibits.  Here's the link for the Apple coverage and the Samsung coverage.

I liked these Apple exhibits: 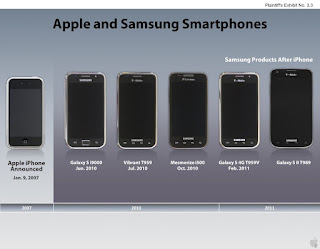 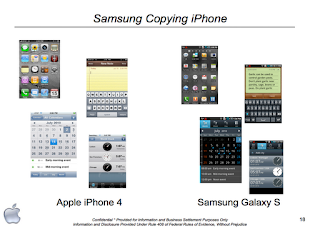 And if you aren't interested in Apple vs. Samsung, how about some good ol' fashion grammar humor-- "your" going to love it.

Posted by David Oscar Markus at 5:00 AM

2. Nice editorial in the paper of record today for DOM