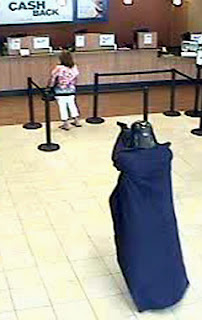 Some quick news items while you try to stay dry:
1.  Darth Vader attempt to rob bank. (via NY Daily News).
2.  Lew Freeman to be sentenced today.  (via Jay Weaver)  UPDATED -- Judge Huck sentenced him to 8 years, 4 months.  (Here's the Herald article).  According to the article, the guideliens called for a much more severe sentence:

Before he surrendered, Freeman hugged his wife and two children in long, tearful embraces and shook hands with dozens of other supporters. He also took off his brown suit -- down to a long sleeve T-shirt, gym short and black loafers, knowing he would probably have to surrender to authorities immediately after his sentence.


Before he was sentenced, Freeman apologized to Judge Huck, his colleagues and his family, saying, ``I have let you down.''

Huck described Freeman, a New York native who moved to South Florida to attend the University of Miami and later its law school, as a Jekyll and Hyde character.


Huck said while his personal charitable deeds and volunteer work in the community were admirable, his theft of millions of dollars from client trust accounts and his lying to the court as a receiver were inexcusable.


Freeman was facing 12 to 15 years in prison under federal sentencing guidelines.

4.  Rumpole picks a fight with me over whether you should ever promise to a jury that your client will take the stand. He says it's too risky.  And I agree that in most cases, you can't make that promise.  But you can't have hard and fast trial rules.  Sometimes, it's worth taking that risk in opening.  Every case is different, so I have only one rule of trial practice -- there are no hard and fast rules.
Posted by David Oscar Markus at 10:00 AM