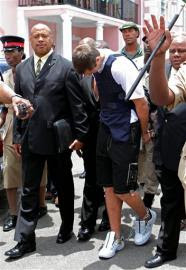 It was a really quick hearing -- according to Curt Anderson:
The American teenager who police call the "Barefoot Bandit" made his first appearance in a U.S. court since being extradited from the Bahamas.
Colton Harris-Moore appeared briefly in federal court in Miami on Wednesday. He is charged with committing a two-year string of break-ins and plane thefts across the United States. A judge set another hearing Friday to give Harris-Moore time to hire a lawyer.
The 19-year-old convict's alleged crime spree ended Sunday when Bahamian police shot out the engines of a stolen boat and arrested him. He pleaded guilty Tuesday to entering that country illegally and was deported hours later.
He had arrived in the Bahamas last week, crash landing a plane he allegedly stole in Indiana
Posted by David Oscar Markus at 2:44 PM