Hey everyone. I'm back. A big shout out to Vanessa Blum for filling in last week while I was out tending to the new Markus bambina.

Speaking of Vanessa, you all should go over here to the South Florida Daily Blog and vote for her and Dore for their guest-blogging on the interviews of the district judge and U.S. Attorney applicants. (UPDATE -- I just checked and we're in second. Come on people... Go vote!)

Judge Graham is back from his summer vacation and picked up the prestigious William H. Hastie award at the National Bar Association Convention in San Diego presented by the Judicial Council. 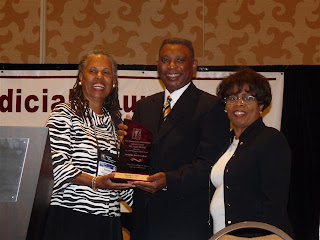 Another NG for the FPD's office last week. This time Ayana H. and Sowmya B. pick up the win in an illegal reentry case.

Good guy Dan Rashbaum has left the U.S. Attorney's office and has joined Matt Menchel in the Miami office of Kobre Kim.

Nick Bogert is moving to Chicago after 30 years of reporting in South Florida. He's having a party on Saturday, August 22 from 7-10PM at Pacific Time Restaurant 35 NE 40th St., Miami. Go wish Nick well. (I remember one exchange I had with Nick a couple years back, after the Gilberto Rodriguez-Orejuella plea. There was a mass of cameras waiting for us outside of court, and I said that Gilberto was honorable for saving his family and not snitching; Nick yelled "Are you claiming that Gilberto Rodriguez is an honorable man after everything that he has done?" It was a fair question, and I stood by my answer.)

One pic of Vanessa in a slightly racy pose would have crashed your servers.

How about giving her a standard spot every week?

What is wrong with sucking up? You do it.

Dude....David....the video...the Feds are going to freaking accuse you of threatening LEOs!!!