Judge Highsmith to retire at the end of the year 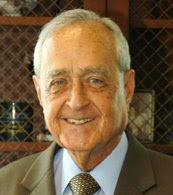 So we were one year off in our prediction.
John Pacenti covers the latest news here. We will have more on Judge Highsmith soon.
We also send our condolences to friend of blog, Dore Louis, for the passing of his father Paul Louis. Like Dore, Paul was quite a character and quite a lawyer. Here is the beautiful article from the Miami Herald. The intro:
He was a dogged attorney, whose representation of a young black man convicted of murder by an all white jury led to a landmark 1984 ruling by the Florida Supreme Court.
He kept a cane in his downtown Miami office, not because he needed it to walk. He swung it in the air or banged it on the table to make his point.
Even when his clients couldn't pay their legal bill, Paul A. Louis stuck by them.
''He wouldn't give up when he got into a case,'' said Miami-Dade Circuit Judge Paul Siegel, who worked with him in private practice for more than 25 years. ``The law firm might not get paid, but he kept on it.''
Louis, whose legal career spanned nearly six decades, died Saturday at age 85.
Only a battle with throat and liver cancer could sideline Louis. Even as his health deteriorated, he checked in on cases.
''Literally after his voice was gone he was mouthing the names of clients that the firm still had and asking about the status of the cases wanting to be kept up-to-date to offer yes or no opinions on how to proceed,'' said his son, Marshall Dore Louis. ``His loyalty was just tremendous.''
Posted by David Oscar Markus at 9:41 AM

Well written Davey my boy. He was one of the good guys!

Although I did not know Paul Louis, he does sound like a man of character. We can always use more of them in our profession on either side of the bar. As a prosecutor let me say this: Contrary to popular opinion, prosecutors, more often than not, respect hard-nosed defense counsel and can appreciate zealous advocacy. I cannot tell you how many times my stomach has churned as some defense lawyer -- trying to curry favor or pretend he/she is still a prosecutor -- has said something deragatory about his/her client to me. Even as a prosecutor, I respect devotion to one's client and lose respect for an attorney who does not. Never throw your client under the bus to save your own reputation; your reputation is linked to that commitment. If you are willing to compromise a single client, you do a disservice to your client, the profession, and the system as whole. I am glad to hear that Paul Louis was the real deal -- just like Hugo Black was the real deal as a prosecutor. Hopefully they can trade war stories in the great hereafter. In the meantime, while speaking of Hugo, congratulations to Mike Davis for carrying Hugo's torch in Hugo's last case, which was before Judge Jordan, and convicting Bachynsky.