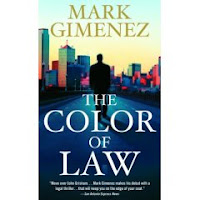 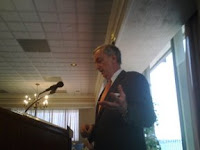 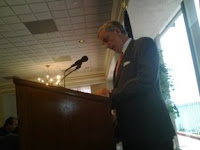 Judge Gold spoke today at the Federal Bar Luncheon about ethics and used Mark Giminez's "The Color of Law" as the basis for the discussion. It was a very entertaining speech and it was well received. Judge Gold's premise: You can do good and do well as a lawyer. Those ideas are not mutually exclusive. Here are a couple of pictures from the event.
Posted by David Oscar Markus at 1:43 PM

Nicest judge in the SD Fl. By far.

That book was not written by our Jimenez using a nome de plume was it? Speaking of which, David, can you give us an update on the most unjust prosecution this district has seen in a while - Ben's. Also, why not start a poll and see if your fine readers thing Jimenez will have the guts to show up at the upcoming dinner and whether he will clap for Ben.

There is no call for that kind of nastiness and poor proof reading on this blog!

Say it ain't so Ben.

Charles A. Comiskey, the "Old Roman," doubted the truth of the rumors that his team's general manager, William "Kid" Gleason, brought to him. He had reason to doubt these rumors because he thought he had assembled a great team.
This talk soon reached Kid Gleason, and he scurried to tell his boss. Comiskey listened and was concerned, but his initial impulse was to deny the veracity of the rumors. After all, he knew his team, and he trusted "his boys."
Comiskey did not want to believe, but he had seen his players' performance. Something was wrong, but what could he do? Without proof or evidence, he could not suspend his players, and it was the middle of the series! Chicago eventually lost the World Series to the Reds.
The story subsequently broke wide open in Philadelphia. The players eventually admitted that they could "deliver" the World Series for $20,000 per game. The proceeds were to be split up between eight players.
Prior to the second day of Shoeless Joe Jackson's testimony before a Grand Jury, as reported by the New York Times, a group of small boys were gathered at the courtroom entrance. One asked, "It isn't true, is it, Joe?" He responded, "Yes, boys, I'm afraid it is." By the time the article reached the west coast, it had become: "Say it ain't so, Joe!"

Time will tell whether our true believer friend will be vindicated by his disparaging comments or be left muttering "Say it ain't so, Ben!"

(1) I think the disparaging comments were unnecessary - sorry.

(2) Whether Ben is aquitted or convicted after trial or by plea, I do not think that the issue will be resolved. Truth be told, absent a very detailed confession, I will find it extremely difficult to accept that Ben would do something like he is accused of doing. On the other hand, if he is acquitted, I am not so naive as to think that many in the US Atty's office and in the community would not hold to their belief that he did something wrong.

As readers of this blog know, I think anonymous comments are a bit cowardly and generally do not merit a response. 3:06 PM "true believer" made a pretty funny comment, though, about whether I had ghost written the book Judge Gold spoke about. All lawyers secretly wish they were published novelists. The author's name reminded me of a funny story about another "Mark Jimenez," a wealthy former Miami business man who was born in the Philippines as Mario Betacan Crespo. When I was a partner at White & Case, I received a very fancy invitation addressed to "Mark Jimenez" to attend a United Way tribute event for big donors at Madonna's former home near Brickell. I thought about going, since it would have been fun to meet Madonna, but instead I called United Way and reported the mistake, and learned it was meant for someone else - certainly the Filipino businessman. He was later indicted for illegal campaign contributions and left South Florida shortly thereafter for The Philippines. Years later, after his interesting return to the United Statess he pled guilty while I was the US Attorney. Here's a link to the DOJ press release where Marcos Daniel Jimenez is listed as one of the announcers of the guilty plea entered by "Mark B. Jimenez."
http://www.usdoj.gov/opa/pr/2003/August/03_crm_439.htm Weird, isn't it?

So, I'm glad to know there is yet another "Mark Jimenez" who is a Texas lawyer with a book published. As we Cuban-Americans like to say, "what a country!"

As for Ben, if my anonymous friend invites me to sit at his or her table, I'd be glad to go. He or she knows where to reach me. As I've said before, I wish Ben the best. I see him at triathlons and on my bike rides from time to time, and it is always a pleasure to see him, and I congratulate him on his award.

I am sick to hear people write such glowing reviews of Judge Gold. Correct me if I am wrong but isnt he the judge who let a child molester be released on bond when experts are saying that such a type of a release is unheard of. To add insult to injury it now appears that liens to secure the bail were never placed on the property. Now the prosecuter wants to set a hearing to bring the child molester in but Judge Gold cancelled the hearing. I have met some pretty stupid people in my life and isnt it ironic that they all live in Florida. Oh and dont start about publishing things using Anonymous. I just didnt feel like creating a Google Blogger ID to write a blog illustrating how stupid Florida lawyers are.