"The beagle is basically a stomach on four feet." 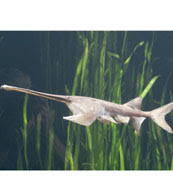 Why does Tom Watts-Fitzgerald have to disrespect the beagle like that?
Okay, okay -- he was just explaining how the beagles find illegal cavier at the airport (via the Daily Business Review):
Watts-FitzGerald said in some ways the illegal caviar trade is just as dangerous as the illicit drug market. Since Russia began protecting sturgeon and limiting caviar exports, caviar fishermen from surrounding republics struck back. "They blew up the barracks of what was essentially the equivalent of the old KGB. They were trying to make a point," he said. "The M.O. is very similar [to the drug trade]. Illicit wildlife smuggling is an $8 (billion) to $10 billion business." Caviar smugglers use mules to hide shipments just like drug traffickers. In the 1990s, 500 grams of Beluga caviar was discovered at Miami International Airport in a carry-on bag by the Food and Drug Administration's version of drug-sniffing dogs: the beagle brigade. "The beagle is basically a stomach on four feet," Watts-FitzGerald said. "When he smelled the caviar, he just went crazy." Caviar smugglers sometimes simply re-use old paperwork from legitimate shipments to try to import illegal goods. But distributors have been charged millions of dollars in fines.
Here is what the case is about:
With a worldwide shortage of premium caviar due to a shrinking sturgeon population, some black market importers have turned to an American cousin: a prehistoric-looking river creature, the paddlefish.
Paddlefish roe has qualities similar to Russian caviar — arguably the finest in the world. But the fish also is protected in many U.S. states due to overfishing and habitat loss. Federal prosecutors charged a Plantation man and his company, Bemka House of Caviar, with flouting the strict permitting laws protecting the paddlefish by buying it illegally.
And the indictment (assigned to Chief Judge Moreno) is here.
Posted by David Oscar Markus at 9:59 AM

Is that a gun in his pocket or is that fish just happy to see me?