What a season!  I hope you had as much fun as I did with Season 2.  And we have a great final episode for you.  Who would represent Terry Nichols, one of the most-hated criminal defendants of all time, accused of blowing up the federal building in Oklahoma City? None other than the dean of the criminal defense bar, Michael Tigar.  You can check it out on Apple, Spotify, and Google,  All other platforms, including a regular desktop player, can be accessed on our website.

After listening, you may want to check out Tigar's memoir, available here.

Some other important items:

If you are a Florida lawyer, you will receive 11.5 CLE credits for listening to Season 2.  The code is at the end of this episode.

If you've enjoyed Seasons 1 and 2, please subscribe and leave a review.  This is the only way we can gain momentum for Season 3.

The original music you will hear in this episode is by Omondi Nyong'o.  The song, A Call to Arms, is really inspirational. Check out his work here. 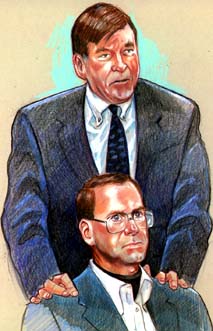 Michael Tigar putting his hands on Terry Nichols' shoulders during closing argument.
.
I'd also like to thank the previous guests of Season 2:
It's not too late to catch up on Season 1 if you missed it, which included the following lawyers:
Donna Rotunno,
Roy Black,
Tom Mesereau,
Marty Weinberg,
H.T. Smith,
F. Lee Bailey,
and Hank Asbill.

Thank you for a great Season! --David