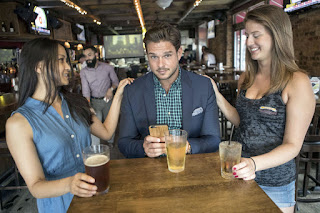 This time Mike Garofola makes news for dating habits in NYC.  From the New York Post:


Ever since Michael Garofola, 36, moved to New York in October, his calendar has been packed with different women penciled in for dinner or drinks.
As a former “Bachelorette” contestant, Garofola knows he has no problem scoring with women — he goes on up to five first dates a week, which he says usually include a drink or two and nothing beyond a goodnight smooch on the cheek. But in the past two months, he’s been feeling spent by the mating game.
“In New York, everyone has this feeling that they have limitless options,” the Gramercy-based lawyer tells The Post. “We have this mentality of, ‘Why should I settle for Susan, who’s beautiful and smart, when I could turn the corner and meet Jessica, who’s just as smart and beautiful?’”
Garofola meets most of the women he dates on Tinder, Bumble and the League. But while he claims he only swipes right on less than 10 percent of profiles, his good looks still net him more than 100 matches a week — and it’s tiring trying to keep up.
“It can be mentally and physically exhausting, and I start to question the time and money I’ve spent,” he says.

Posted by David Oscar Markus at 11:19 AM

Didn't he clerk for a judge down here too?

He seems to do well with the ladies for a small guy.

Not even those who cared back then care now.