David W. Dyer building to be used by Miami-Dade College

I love this courthouse and I miss trying cases in it.  But this is good news as it will finally be put to use again.

The Herald covers the deal here:


Miami’s old federal building, a Depression-era Neoclassical masterpiece that’s among the grandest of the city’s historic structures, has been vacant and moldering since 2008, its fate uncertain. But now a rescue is in the offing that will restore it to public use.
After years of negotiation, the federal government has agreed to cede the 1933 landmark to its neighbor, Miami Dade College, for use as an academic and civic building. The college and the government’s property-management arm, the General Services Administration, signed a 115-year, one-dollar-a-year lease agreement Wednesday evening.


The building is really cool:


The federal building, which housed the central Miami post office and all federal agencies but the weather bureau when it opened in 1933, was designed by Coral Gables’ chief architect, Phineas Paist, and Miami architect Harold Steward, with an assist from Marion Manley, the first licensed female architect in Florida and designer of early University of Miami buildings. Paist and Steward also collaborated on the design of Coral Gables City Hall and the buildings at the Liberty Square housing project. (Another Gables connection: that magnificent courtroom mural, Law Guides Florida Progress, is by artist Denman Fink, designer of the Venetian Pool.)
Although it was the height of the Great Depression, the government spared no expense on the building, believed to be the largest structure in South Florida made of Florida limestone. Window surrounds are made of marble, as are the floors and former post-office tabletops still in place in its elongated lobby. Spandrel panels running beneath the second-story windows on the main facade depict scenes from Florida history. That facade is defined by a towering row of Corinthian columns. Inside, original chandeliers and coffered ceilings are still in place, the college said.


The central courtroom was also the scene of some historic legal events, including the Congressional Kefauver hearings into organized crime that were televised to the nation in the 1950s and the trial of deposed Panamanian dictator Manuel Noriega in 1991.
But use of the building gradually declined after the post office moved out in 1976. Most federal judges moved to a modern tower annex which opened in 1983, leaving mostly magistrates in the old courthouse. The last moved out after the newest courthouse opened a block away in 2008. The tower annex remains in use by the courts and is not part of the MDC deal.
The GSA then shuttered the historic building, which had been plagued by mold and complaints from court workers about respiratory ailments that had led to closure of some courtrooms and portions of the structure in 2006. The agency has continued to run the air conditioning to keep humidity and deterioration of the interior under control.
But the GSA came under fire from some Republican members of Congress who, during a 2012 hearing in the Dyer building’s central counrtroom [sic], scolded the agency for wasting taxpayer resources by failing to find a new tenant or sell the courthouse. A member of that delegation, Florida U.S. Rep. John Mica, is a Miami-Dade grad who pushed for the deal to give the college use of the building.

d more here: http://www.miamiherald.com/news/local/community/miami-dade/article77050342.html#storylink=cpy
I wonder what the College will do with the controversial mural in the central courtroom: 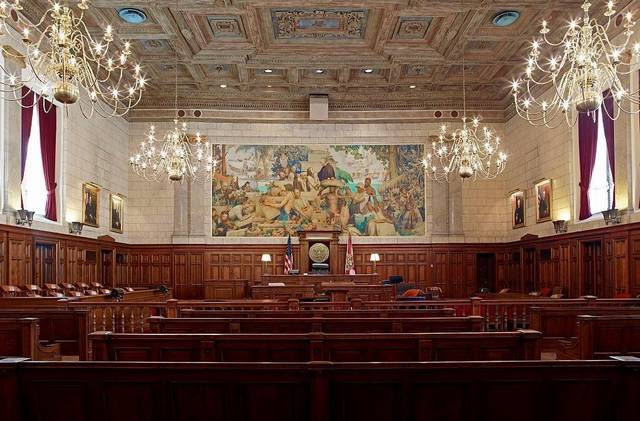 Posted by David Oscar Markus at 9:25 AM

I love that mural. You can see it in the opening scene of the Hitchcock flick, "Notorious".

Mural is a little racist. Should be painted over.

The mural is a part of the building's history. Keep it.

I covered every day of the Noriega trial, and every day of the Court Broom trial, in that courtroom when I was a reporter at The Review. I have to confess: Not every minute of every day was entirely scintillating, so I more or less committed that mural to memory.

Would that mural grace the wall of a federal building built today? Certainly not -- and not only because the scene can be charitably described as "patriarchal," and not unfairly described as "racist." Still, it's an important and impressive historical artifact and a work of art, and I do hope it won't fall victim some version of a safe space paint roller.

Another, more modern, movie appearance: The courtroom and mural also appear in the movie "Wild Things." The exterior scenes just before the rape trial early in the movie are filmed on the steps of Dade County Courthouse at 73 West Flagler. But when everyone goes inside and the scene transitions to the courtroom -- where Bill Murray is defending Matt Dillon -- it is the Central Courtroom.

Interesting that people are defending as "historical" a racist mural in a courtroom where people of color were told that justice was being dispensed.

I was trying a very long jury trial with days of wiretaps being played to the jury. I passed the time by scrupulously studying the colorful mural from side to side, to top to bottom. It is truly a masterpiece from old Florida and should be preserved. The courtroom was also where Judge Sepe and others were tried. I recall watching Ellen Morophonios testify in that courtroom. That was classic.

Very glad the mural holds a special place in your heart. Unfortunately, it's racist and has no place in a public building.

You cannot white-wash our racist history. It must be acknowledged and confronted but it need not be glorified and romanticized. A client once shared his feelings of being sentenced in that courtroom by an "old white man judge" and of being the only non-white person in the courtroom. In his words the only thing missing was the rope.

If you're really quiet in one of the stair wells, you can still hear Roettger and Kehoe chuckling about the look on the AUSA's face when they told him or her that 404(b) wasn't in their rule book. They don't make em like that anymore, judges or courthouses.