The internet is awesome

1.  Jeff Ashton (the Casey Anthony prosecutor who has 5 kids and preaches family values) is outed on Ashley Madison.  And then he gave a press conference to discuss.  No joke:


His ideal partner would “know what she wants” and would not be afraid to ask for it. A “big toy collection” would not be all that bad either, he wrote.
“You must be discrete, not looking to change my situation, just want to get excited again.”
He also boasted of his sexual prowess in his profile, the Orlando Post shared.
“I want someone that fantasizes about being brought to a climax by a lover with a skillful tongue and fingers as well as his member,” he added.

2.  Jeb Bush does not have a black hand.  But this flier! 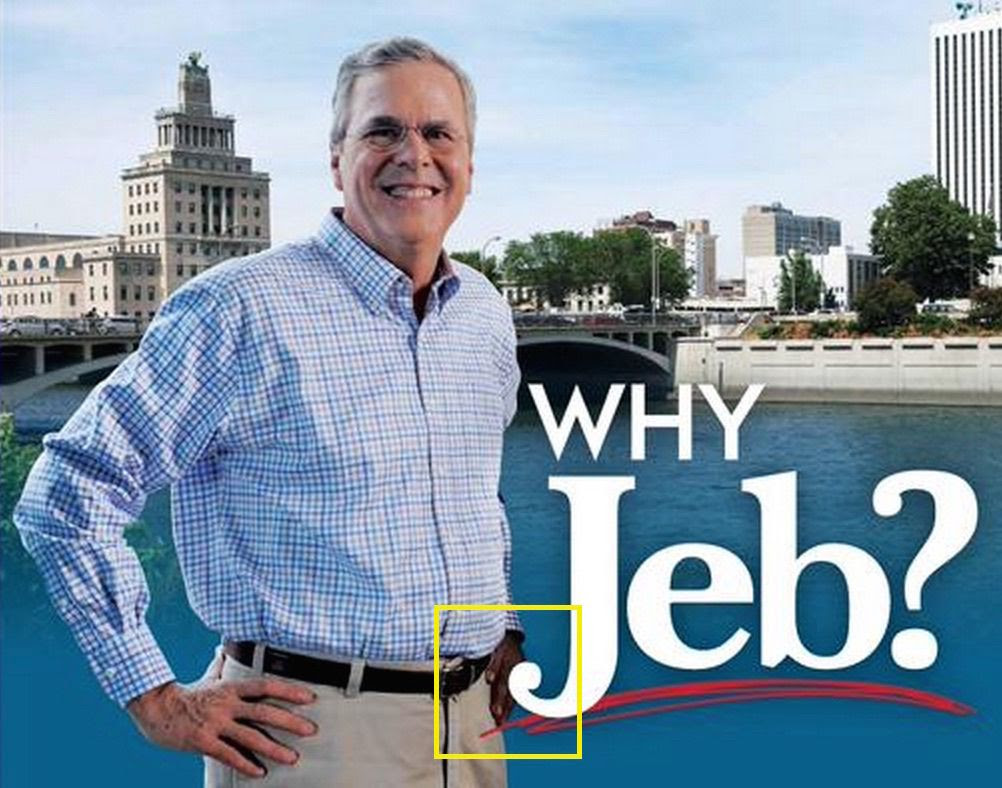 
A campaign leaflet sent out by a pro-Bush super PAC that shows him with a black left hand, and his body apparently super-imposed on a picture of Cedar Rapids, Iowa.
“Jeb Bush has a Photoshopped photo for an ad which gives him a black left hand and much different looking body. Jeb just can’t get it right!” the real-estate mogul said of his rival for the 2016 Republican nomination, who he has frequently assailed recently on the campaign trail.
The leaflet’s copy, “Why Jeb?” ended up being co-opted by bemused Twitter users to ask, “Why, Jeb?” as to why his hand had become black. The original campaign leaflet was sent by the Right to Rise USA Super PAC to some 86,000 Iowans, as Bush seeks to raise his game amid lackluster polling in the first-in-the-nation caucuses state.

Oh and welcome back to school... and traffic!

Posted by David Oscar Markus at 8:07 AM

Florida prosecutor Jeffrey Ashton may not fully understand the true nature of Ashley Madison. In my view it uses a fraudulent business model, one "that generated fictitious profiles to simulate communication with real members". As a married man, Aston bears the burden of faux-infidelity in a conservative state like Florida. Otherwise his sex fantasies as reported appear normal.

I question how many actual "casual encounters, married dating, discreet encounters and extramarital affairs" result from the Ashley Madison website because unsuspecting members engage in dialog with fictitious profiles:

"Several aspects of Ashley Madison are described in the Terms and Conditions as "For Your Entertainment."[19] This included Ashley's Angels, a feature that generated fictitious profiles to simulate communication with real members and perform market research. According to the site, Ashley's Angels accounts "are NOT conspicuously identified as such."[20] Ashley's Angels profiles were limited to messaging only guest accounts and users could opt out of the feature via their profile management page. Users were charged the standard rate to read messages from and chat with these fictitious profiles."

Noel Biderman, a former lawyer, is a Canadian Internet entrepreneur, and the CEO of Avid Life Media, the parent company of Ashley Madison. https://en.wikipedia.org/wiki/Noel_Biderman

Unfortunately Ashley Madison and other such websites are unregulated.

My extended comment begins, "Craigslist is out of control too. Anyone, anywhere, can place a fake sex ad on Craigslist, with malice aforethought, including minors. Craigslist does not pre-screen sex ads or require sex ad posters to register before placing a sex ad. Its like the wild west at Craigslist."

I would like to see another press conference by Mr. Ashton, one where Ashley Madison and Craigslist et al. are brought to justice. See FTC v. JDI Dating, Ltd., Case: 1:14-cv-08400, Order and Injunction, October 30, 2014, US Judge James B. Zagel, USDC, Northern District of Illinois, Eastern Division. https://www.ftc.gov/system/files/documents/cases/141028jdidatingstip.pdf

"In one of the most significant fines imposed by a government on an online dating site, UK based JDI Dating Ltd was fined by the U.S. Federal Trade Commission $616,165 for use of fake profiles. http://www.onlinepersonalswatch.com/news/2014/10/jdi-dating-fined-616k-for-fake-profiles.html

An analysis by Annalee Newitz of Gizmodo shows the majority of men using Ashley Madison weren’t having affairs, they were paying for a fantasy....see:

Almost None of the Women in the Ashley Madison Database Ever Used the Site
http://gizmodo.com/almost-none-of-the-women-in-the-ashley-madison-database-1725558944

When hacker group Impact Team released the Ashley Madison data, they asserted that "thousands" of the women’s profiles were fake. Later, this number got blown up in news stories that asserted "90-95%" of them were fake, though nobody put forth any evidence for such an enormous number. So I downloaded the data and analyzed it to find out how many actual women were using Ashley Madison, and who they were.

What I discovered was that the world of Ashley Madison was a far more dystopian place than anyone had realized. This isn’t a debauched wonderland of men cheating on their wives. It isn’t even a sadscape of 31 million men competing to attract those 5.5 million women in the database. Instead, it’s like a science fictional future where every woman on Earth is dead, and some Dilbert-like engineer has replaced them with badly-designed robots.

Those millions of Ashley Madison men were paying to hook up with women who appeared to have created profiles and then simply disappeared. Were they cobbled together by bots and bored admins, or just user debris? Whatever the answer, the more I examined those 5.5 million female profiles, the more obvious it became that none of them had ever talked to men on the site, or even used the site at all after creating a profile. Actually, scratch that. As I’ll explain below, there’s a good chance that about 12,000 of the profiles out of millions belonged to actual, real women who were active users of Ashley Madison.

When you look at the evidence, it’s hard to deny that the overwhelming majority of men using Ashley Madison weren’t having affairs. They were paying for a fantasy....