Today was another moving Boot Camp graduation for 32 young male cadets through the Miami-Dade Boot Camp Program.  For 20 years, Miami-Dade Corrections has been putting young men and women, previously destined for lengthy prison sentences, through the rigors of Boot Camp and giving them a second chance on life.  The program is a big success.  The numbers speak for themselves -- a recidivism rate of only 8%.

This ceremony was particularly special because of two guests.  Jason Bravo, a former Boot Camp graduate, now lawyer, spoke to the class about believing in themselves and continuing on the right path, as hard as it may be. 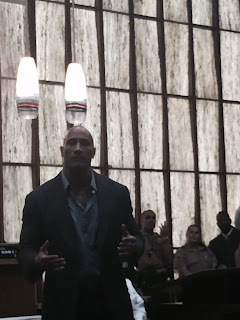 Dwayne "The Rock" Johnson also spoke to the cadets and their family members, disclosing that he had been in trouble with the law multiple times as a teenager and knew what it was like to disappoint his family and friends.  Had it not been for people seeing the potential for more in him, he would have ended up in prison.

Judge Nushin Sayfie had previously told the graduates that they may not be like the Rock, but they had the ability to become something good.  Johnson followed up on this thought and told them that it's true that they wouldn't be like him.  Instead, they could become something even better than him.  It was very inspiring.

HBO was there filming for a documentary that Dwayne Johnson pitched, heavily supported, and will appear in.

It was a good day in criminal court.

The feds used to have boot camp as well, but it was disbanded back in the early 90s due to budget cuts.  It should be put back in place and it should use the state as a model.

Posted by David Oscar Markus at 8:20 AM

Congrats to the Rock for graduating boot camp! Hope he gets his life back on track.

Congrats to the SDFL federal court blog for reporting on a state court boot camp program but not the lockdown of the federal court building for about two hours today. I guess punting to Jay Weaver is okay?

Federal Boot camp is an idea whose time has come. There is genuine bi-partisan support for prison reform and Boot Camp I something that appeals to everyone. Having a successful state model only makes it more likely to happen in Fed Court. Stop Hatin'