I wish I had a little more District news for everyone, but it's fairly quiet in the SDFLA.  But here's what's up:

1.  Here's a very interesting article from Slate about the two times people snuck cameras into the Supreme Court.  Can you imagine if that happened now?  Here's one of the pictures from 1937. Really neat. 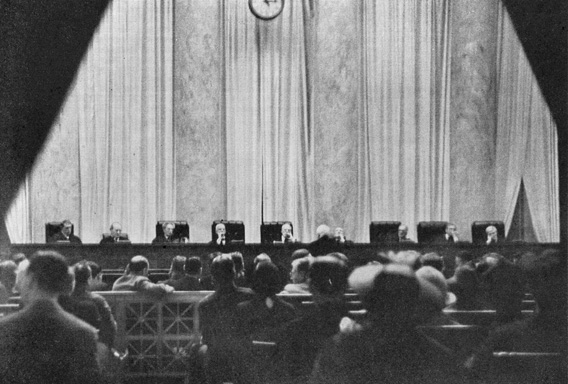 2.  Lots of coverage of the houseboat argument from the High Court.  Here's SCOTUSBlog:

It used to be said that the way to identify whether a stream was navigable was whether a log would float in it.   Seems a bit old-fashioned.  Perhaps it now could be said that the way to know whether a floating structure is or is not a “vessel” is to ask whether, if it were a styrofoam sofa, would it float?   Seems a bit silly, but that is sometimes the way it goes when the Supreme Court Justices try to outdo each other in imagining homely illustrations in order to make legal points.   It was Justice Stephen G. Breyer (usually to be counted upon to go from the ridiculous to the sublime with homely examples) who wondered on Monday about that lightweight sofa bobbing on the surface, perhaps with a retiree sitting back and enjoying being carried along.  At least it was funnier than Chief Justice John G. Roberts, Jr., wondering if an inner tube is a boat.

Breyer and the Chief Justice were reacting to Washington lawyer David C. Frederick, who had urged the Court in Lozman v. Riviera Beach to rule that a floating structure is a “vessel” in a legal sense “if it floats, moves, and carries people or things on water.”  Frederick was going for the purest of simplicity as the Court tried to untangle the case of a Florida floating home that wound up in a maritime court on the theory that it was a “vessel,” legally speaking — even though the only way it could move was to be towed, like a garbage scow.  (A garbage scow did not actually get into the oral argument, but Justice Anthony M. Kennedy made it clear, with abundant sarcasm, that this lowly structure was far from a mansion: said he, it was “a magnificent structure” that had been “mercifully destroyed.”)
The definition of a “vessel,” for purposes of maritime law is, indeed, a very big deal for the maritime industry, for the Coast Guard, and for lawyers who practice in the arcane field of admiralty law.  While the Justices were having boatloads of fun with the Lozman case, they knew that the outcome of it will shape maritime commerce in a very important way.  Because the Court’s precedents on the point seem to meander like so many leaves on a brook, it would be quite important if the Court could say — once and for all — what the word “vessel” means.  That’s why the Court reached out and took the case of the eccentric South Florida millionaire, Fane Lozman, and his floating home — of which, it was said Monday, there was not another like it in all of Florida.


And here's the PBP article, which is also interesting.

3.  How conservative is this Supreme Court?  Very, according to the NY Times, but it could move even further to the right if Romney is elected:

Professors Epstein and Martin have also brought up to date their annual analysis of the justices’ ideologies—their relative conservatism or liberalism based on their voting records. The news is that Justice Samuel Alito Jr. moved even farther to the right.
It’s no surprise that the upcoming presidential election could be very significant for the court. But Epstein-Martin’s ideology analysis allows us to measure how different it would likely be if Mitt Romney gets to replace Ruth Bader Ginsburg compared with President Obama replacing Antonin Scalia or Anthony Kennedy.  A Roberts-Alito-like replacement for Justice Ginsburg would move the court dramatically to the right. But a Kagan-Sotomayor-like replacement for Justice Scalia or Justice Kennedy would move the court to the moderate left, with the center somewhere around Justices Elena Kagan, Sonia Sotomayor, and Stephen Breyer.
As this term begins, however, the line-up’s the same as last year, and there’s every reason to expect the court to continue along its conservative path.

Posted by David Oscar Markus at 9:18 AM

Another sterling headline. How about: "I spy"? or
"Concealed camera catches court" or "Houseboat hard a port".

News & Notes will do. DOM has real matters to attend to in federal court (unlike other bloggers).

and another thing...this blog is such awesomeness unlike others who make fun of people's misery.