The DBR covers Judge Bandstra's departure to JAMS.  Good luck to him!  There are some good stories about him in the article:

“Henry’s my mentor and the person I respect most,” Bandstra said.

He said his experience as a magistrate can help sparring sides see their legal situation more realistically.

“One of the things I’ve enjoyed most as a judge is the settlement of cases where I’ve had some input,” Bandstra said.

“First of all, you weren’t my first choice,” Bandstra recalled him saying. “That took me back a little bit.

“The other thing was, ‘You should know you got the judges’ vote on the first ballot, which has never happened.’ ”

The debate last night was a good way to show how important facial expressions are during trial.  In the first debate, Obama lost not so much for what he said, but mostly because he kept looking down, writing, and shaking his head.

Last night, Romney got trounced in part because he had this weird grin on his face all night which didn't seem appropriate. 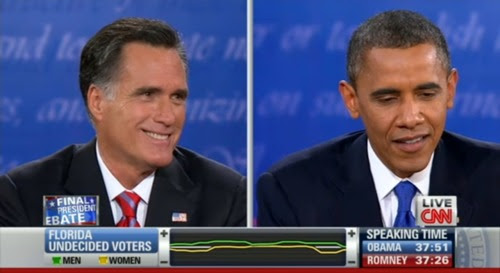 Plus, there was this:

Posted by David Oscar Markus at 9:22 AM

Nice revisionist history. Obama lost the first debate in large part for what he said.

Captain - give Fox give you the day off?