Everything relates back to Miami 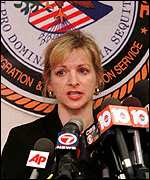 Even the Herman Cain accuser... From the Miami Herald blog:

The name of the second woman to say publicly that she was harassed by GOP presidential contender Herman Cain may ring bells with Miami Herald readers. Karen Kraushaar was a spokeswoman for the then-Immigration and Naturalization Service during the Elian Gonzalez custody battle in late 1999 and early 2000.
Kraushaar was one of the two woman who spoke to Politico for the Oct. 30 story detailing complaints by female employees who worked for Cain at the National Restaurant Association. She and another employee "had complained about Cain’s behavior to colleagues and senior officials at the NRA, and both women left the trade group with a cash settlement," Politico reported. Kraushaar's settlement was about $45,000, Politico reported.

According to several published reports, Kraushaar, 55, heads up communications for a bureau within the IRS. Although many news outlets were aware of her identity, they did not disclose it until the iPad-only publication The Daily revealed it Tuesday. Kraushaar told both Politico and the Washington Post that she would be willing to join together for a press conference with the other three women accusing Cain of harassment. Only one of the other women has so far come forward publicly.

"I am interested in a joint press conference for all the women where we would all be together with our attorneys and all of these allegations could be reviewed as a collective body of evidence,” Kraushaar told The Washington Post Tuesday

In other news, the SCOTUS Blog folks seem to think that after hearing oral argument, the Supremes will say that you need a warrant before GPS tracking. But it doesn't look like the defense lawyer did a great job (via Forbes):

When Jones’s lawyer came up to argue, it was a little like watching 9 cats play with an injured mouse that they felt pity for. A criminal defense attorney who has never argued before the Supreme Court before, Stephen Leckar focused solely on the unreasonableness of the police putting a tracking device on his client’s property without a warrant and refused to indulge the Supreme Court’s questions about the pervasiveness of the monitoring itself. When one justice asked whether this would have been a reasonable act by police if they put the tracker on the license plate of the car (which is owned by the State) rather than the underbelly of the Jeep, Leckar actually said yes. Justice Scalia jumped in to help him out, saying that a driver gives the government the right to put a license plate on a car, not a tracking device on their car.

Justice Kennedy asked whether it would be acceptable if the DC police had tracked Jones for a month with a team of agents following him rather than doing it with a tracking device. “We’re not asking for the police to be less effective,” he replied. “But GPS trackers greatly expand what they can do.”

Yikes. Apparently the advocacy in the High Court this week hasn't been great. Here's SCOTUSBlog on a prosecutor's attempt:

There may be many ways for a lawyer to realize that an argument before the Supreme Court is falling flat, but none can top this: a Justice asking if the counsel had ever considered simply forfeiting the case. That is what happened on Tuesday to Donna R. Andrieu, an assistant district attorney in New Orleans, as her argument lay all about her, in shambles. It is a heavy burden for a lawyer from that oft-criticized office to mount any defense of its prosecutions, but Andrieu repeatedly found ways to botch virtually every point as she argued Smith v. Cain (docket 10-8145).

It only got worse for Andrieu. Justice Antonin Scalia suggested that the prosecutor “stop fighting as to whether it should be turned over. Of course it should have been turned over…Why don’t you give that up?” The prosecutor again tried, astonishingly, to make one more effort to rehabilitate witness Boatner’s credibility.

At that point, it seemed that nothing more could embarrass the New Orleans prosecutor. But Justice Sotomayor then brought up the “serious accusations against the practices of your office, not yours in particular but prior ones. It is disconcerting to me that when I asked you the question directly should this material have been turned over, you gave an absolute no.” Andrieu weakly suggested that she had misunderstood the question.

But Sotomayor pressed on: “It is somewhat disconcerting that your office is still answering equivocally on a basic obligation as one that requires you to have turned these materials over, whether it caused harm or not.” Andrieu still did not seem to understand. She said that “today we turn all of this over….It should have been turned over. I guess what I was addressing or attempting to address was the materiality prong of Brady.”

Posted by David Oscar Markus at 9:08 AM

Yeah, great case solution tips has been provided here, I'm feeling very much mature after reading that subject, and know the technical know how of these kinda cases, thanks!