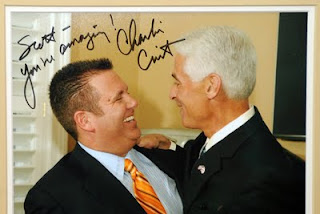 That was the name of 22 of Scott Rothstein's corporations and it stood for "What a Wonderful World." Indeed. Here's the Sun-Sentinel story covering the genesis of the Rothstein spending, which started sometime in 2005.

I know, I know, enough Rothstein. But the Wall Street Journal got in the act, even including a slide-show. And here's the accompanying article, with some interesting stories including this one:
At an Eagles concert this year, Don Henley, the band's drummer, singled out Mr. Rothstein and his wife, Kimberly. "I don't normally do this, but this goes out to Scott and Princess Kimmy on their one-year wedding anniversary," Mr. Henley told the audience as the band ripped into "Life in the Fast Lane," its paean to the perils of excess. Mr. Rothstein paid $100,000 to one of Mr. Henley's charities for the dedication.

If you are sick of Rothstein, you're gonna want to puke after another story about how abysmal Obama has been with judicial selections. The New York Times has weighed in:
President Obama has sent the Senate far fewer judicial nominations than former President George W. Bush did in his first 10 months in office, deflating the hopes of liberals that the White House would move quickly to reshape the federal judiciary after eight years of Republican appointments.
Mr. Bush, who made it an early goal to push conservatives into the judicial pipeline and left a strong stamp on the courts, had already nominated 28 appellate and 36 district candidates at a comparable point in his tenure. By contrast, Mr. Obama has offered 12 nominations to appeals courts and 14 to district courts.
Theodore Shaw, a Columbia University law professor who until recently led the NAACP Legal Defense and Educational Fund Inc., said liberals feared that the White House was not taking advantage of its chance to fill vacancies while Democrats enjoy a razor-thin advantage in the Senate enabling them to cut off the threat of filibusters against nominees. There are nearly 100 vacancies on federal courts.
“It’s not any secret that among the civil rights community and other folks there has been a growing concern about the pace of nominations and confirmations,” Mr. Shaw said. “You have to move fairly quickly because things are going to shut down before you know it, given that next year is an election year and who knows what is going to happen in the midterm elections. No one wants a blown opportunity.”
Seriously, what is taking so long?
Posted by David Oscar Markus at 10:05 PM

Looks like Crist is about to give Scott some tongue!