Oral arguments at the Supreme Court

So I snuck out a bit early from my meeting today and went over to the Supreme Court. I sat in the attorney room for the tail end of the Stevens case, which addressed whether the First Amendment trumped the statute prohibiting the sale of depictions of animal cruelty. From what I heard, the case will be 8-1 in favor of the criminal defendant Stevens, holding that Section 48 -- prohibiting the sale of depictions of animal cruelty -- is unconstitutional. The one Justice that seemed to say that Congress could pass such a statute was Alito.

Then I actually got into the courtroom and saw the oral argument in Johnson v. United States, a sentencing case from the Eleventh Circuit addressing whether under the federal Armed Career Criminal Act a prior state conviction for battery is in all cases a “violent felony,” even when the state held that offense does not have as an element the use or threatened use of physical force.

It's amazing how close they let members of the Supreme Court bar sit to the Justices. It's like sitting in the front section of the movie theatre before the stadium seating starts. Very close. In this case Justices Scalia and Breyer were going at it. Scalia was clearly in favor of the criminal defendant and Breyer was clearly against. It will be a close case, probably 5-4... I would bet in favor of the defendant. Scalia used a hypo that made everyone laugh -- he asked whether if he told the government lawyer to shut up or he would flick her with his index finger, then would he be committing a violent felony. The government lawyer said yes... Any unwanted touching counted. Scalia didn't agree. Sotomayor was also an active questioner. Breyer kept asking about the "mine run" case, which sounded weird after the 4th or 5th time he used that term. He also took a jab at Scalia, saying if one were to read the legislative history of the statute, which some of his colleagues didn't do, it would be clear that Congress intended to cover this conduct. Chief Justice Roberts said that Congress could have been clearer and used the word battery if it wanted all battery cases covered. 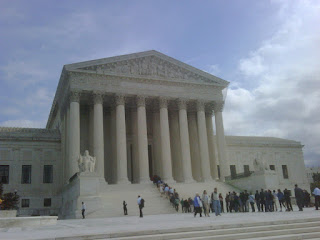 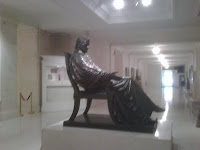 Good stuff, David -- what a treat.

Lisa Call, an AFPD from the Middle District of FLorida, argued the Johnson case and did a great job. Scalia's a bully, but it tmust be fun to argue when he's on your side.