Some funny stories reported around the blogosphere today:
1. James Muirhead, a federal magistrate in New Hampshire, wrote a very funny order today based on Green Eggs and Ham after an inmate filed a lawsuit based on the food he was being served and attached an actual egg to the pleading. Here's part:
“I do not like eggs in the file. I do not like them in any style. I will not take them fried or boiled. I will not take them poached or broiled. I will not take them soft or scrambled Despite an argument well-rambled.” Thre rest of the order here.
2. Judge Posner, from the 7th Circuit, wrote an order about horse meat in which the court upheld an Illinois law making it unlawful to “slaughter a horse if that person knows or should know that any of the horse meat will be used for human consumption.” Here's the initial paragraph:
Horse meat was until recently an accepted part of the American diet—the Harvard Faculty Club served horse-meat steaks until the 1970s. No longer is horse meat eaten by Americans . . . though it is eaten by people in a number of other countries, including countries in Europe; in some countries it is a delicacy. Meat from American horses is especially prized because our ample grazing land enables them to eat natural grasses, which enhances the flavor of their meat.
Here's the opinion.
Check out page 11 -- which includes a picture of a lion eating a horse meat cake. No kidding. Here it is: 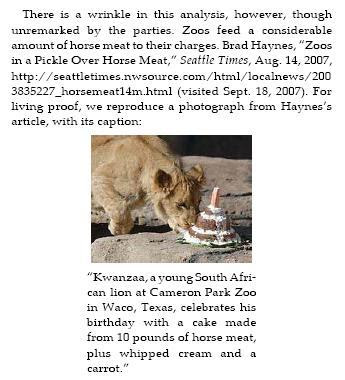 Email ThisBlogThis!Share to TwitterShare to FacebookShare to Pinterest
Labels: off-blog

Anonymous said...
This comment has been removed by a blog administrator.
4:41 PM

David Oscar Markus said...
This comment has been removed by the author.
5:02 PM