1. The Robles plea was accepted. Lots of news stories everywhere about it. There is a 15 year cap, instead of the 10 year cap previously agreed to by the parties. It will be interesting to see whether the government argues that a 10 year sentence is reasonable, notwithstanding the guidelines which I suspect will be a lot higher.

2. The Liberty City 7 case is underway. Again, lots of news stories about the jury selection and the start of the trial. Props to Judge Lenard for conducting a thorough voir dire. It looks like it will take a couple weeks to pick the jury in this case. That is appropriate considering the type of case it is and the press that has come with the case.

3. Last night Milton Hirsch had a constitution day party at his office. Here's the Joan Fleischman column about it. The office was packed with lawyers and judges. Federal judge sighting -- Judge Ungaro read the 15th Amendment, which states:

I read the Fourth Amendment. Does anyone remember that one? 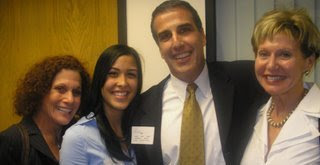 No one in your building (fed ct) remembers it.

Anonymous said...
This comment has been removed by a blog administrator.
11:25 PM