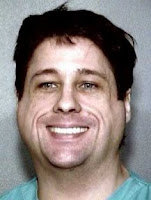 The Miami Herald and Sun-Sentinel have stories about the Kenneth Wilk trial going to the jury. Closing arguments were heated... From the Herald:
Wilk's home had been targeted in the past by gay bashers and Wilk had been threatened over the Internet, [Defense lawyer Bill] Matthewman said.
''They're busting into a man's house, his castle, and they know he has hearing loss,'' Matthewman said.
But prosecutors contend Wilk ambushed the officers that morning, saying he was obsessed with police officers and stockpiled guns for just such a day.
Prosecutors have said Wilk repeatedly indicated he wanted to harm police officers for what he saw as unfair child-pornography charges against his partner, Jones.
''No, the defendant didn't know the day they'd come,'' prosecutor Neil Karadbil said during closing arguments. ``No, he didn't know the time, but he was ready when they did.''
Wilk has simply made up excuses for his actions, Karadbil said, criticizing the defense's contention that Wilk suffered from severe hearing loss and AIDS-related dementia.
Wilk suggested Jones use the same defense after Jones' was arrested, Karadbil said.
''He thinks he can explain away everything in the case,'' Karadbil said. ``He thinks he's the smartest man in the room, but what he is, more than anything, is a liar.''
If convicted of the murder charge, Wilk could receive the death penalty.
The panel of eight women and four men began deliberations just after 3:30 p.m. Shortly after, the jurors asked U.S. District Judge James I. Cohn for a transcript of Wilk's testimony. Cohn told jurors there was not a copy of the transcript available for them and to rely on their recollection. The jury will resume deliberations today.
The prosecution got so upset, it made a completely inappropriate remark that will be looked at very carefully by the 11th Circuit if there is a conviction. From the Sun-Sentinel:
One comment the prosecutor made caused the defense to ask for a mistrial.Kastrenakes had ridiculed the defense's experts and remarked about how they were being paid by taxpayers."Where's our tax dollars going -- to pay them?" Kastrenakes asked the jury.The defense objected. Later, when the jury was out of the courtroom, U.S. District Judge James Cohn said jurors could interpret the comment to mean that the defense was wasting jurors' money on Wilk's defense.Kastrenakes said his comment was about the "value we are getting as citizens." The defense noted that taxpayers pay for prosecution witnesses too.The judge said he had to tell jurors to ignore the comment."That is a totally improper argument and you are to disregard it," Cohn told the jury.Wilk has a constitutional right to have the court pay for expert witnesses and the way the money was spent was not an issue in the case, Cohn explained.
Posted by David Oscar Markus at 9:59 AM

Johnny K never missed an opportunity to throw in a sleazeball comment when he was an ASA- good to see he hasn't changed.

You are right that the 11th Cir will look as this closely. In fact, Johnny K made a similar argument in U.S. v. Campa, 419 F.3d 1219. In that case the district court sustained objections during the closing and the 11th found the comments improper. This is clearly part of his playbook.

interesting that someone assails Johnny K for his actions now and at the SAO. I missed the post where someone thanks him for passing up the big money and instead devoting his talents to helping to protect the community from a veritable rogues' gallery of criminals. He has taken on all comers - corrupt politicians, spies, drug gangs, cold-blooded murderers, and more - and he deserves some thanks.

Is it a "talent" to make improper arguments to the jury? The thanks should go to those prosecutors who prosecute the "bad guys" and do so ethically.

The overwhelming majority of prosecutors deserve our respect and gratitude for passing up the "big bucks". A few are motivated by ego and power, do not respect the law if it gets in the way of their agendas, and chuckle to themselves when they get away with something slimey. Johnny K is in the latter group.

pulling snippets out of context and in isolation from the overall record in lengthy and heated trials isn't a fair way to judge any lawyer, prosecution or defense. Maybe the venom to Johnny K comes from his willingness to take on the toughest cases and adversaries and fight hard in response to what the defense presents

johnny k. always like to hit below the belt. he did it in the joyce cohen trial and got away with it because of alan ross' incomptence. there are other cases where he improperly lied to jurors and was sanctioned for it. this is his style and he will never change.

Johnny K certainly is a topic of interest, It is rare to see anyone draw such an extended strong of comments on this blog. Too bad someone felt the need to take a cheap shot at Alan Ross along the way.

I was questioned by John K and did testify in the case. He was a fair guy. He tried to be friendly but I could see that it was just a facade. He does hit below the belt and he did it to me during my testimony. He is dedicated to his job.

1:10 p.m. - you seem to be of two minds about Johnny K. I ask this question to those posting and reading this string: if it was your loved one who was killed, would you want Johnny K involved in prosecuting the killer? I certainly would.

I would not want a prosecutor who causes the case to be reversed years later because his ego will not allow him to follow the law and make a proper closing argument.

1:44 asks the wrong question. Your question is - does it matter to a victim of crime whether the prosecutor is ethical. Normally, it does not, unless the case gets reversed and has to be tried again.

Asking that question of crime victims is like asking whether someone minds if the cops violate the constitution when they arrest someone. The answer is no. Only we in the system do, and should care.

Obviously you are in the system and do not care. That's why you should be out of the system.

1:16 - you are presuming from tiny excerpts from a lengthy career that Johnny K is not an ethical prosecutor. This is an unfair conclusion. I care very much about the system, and have devoted my career to doing things the ethical way to seek justice, not just victories. I have no use for truly unethical prosecutors or defense attroneys. But I don't like to see people personally assailed for comments unrepresentative of their body of work. 1:44

....interesting how no one ever criticizes the mediocre prosecutor, only the ones who call it like it is, not as it should be. Absent in all of these comments is some street-sense reality of who Wilk really is, a sociopathic cop-killer. If defense counsel did not try to mislead the jury on how their experts were "paid by the Court", JK wouldn't have had to set the record straight. He deserves a pat on the back, not a kick in the pants.

this whole jonny k issue is nonsense. the guy is bar none the best trial lawyer in the US attorneys office as he was in the SAO before he became a fed. He has been involved in so many big cases and while dealing with this cop killer he is involved in one of the biggest public corruption cases in plam beach where half the county commission has gone down.
what really pisses you defense attorneys off is that he routinely beats you like red headed step children and you just cant accept the beating he routinely administers to you. he also smashes you stereotype of the boring plodding federal prosecutor.

5:50 p.m. offers wisdom and insight - but can he run the elmo machine?