Hope everyone had a nice holiday weekend.


The Wilk jury continues its deliberations tomorrow. The prosecution cannot be happy that they are still out and that they didn't come back quickly. The defense can't be happy that they were home over a long weekend where they would be pressured by family and friends to get it over with and convict. Ahhh, the stresses of having a jury out deliberating. There is nothing worse...

The Christian Science Monitor has been doing a very nice job covering the Padilla trial. Here's an article about the other two defendants in the case, Adham Hassoun and Kifah Jayyousi. And the article covers this fun exchange:


In testimony last week, FBI translator Majed Sam acknowledged that it was up to him to decide which conversations to translate. But he said he pursued no FBI agenda. "My goal is to translate everything in as accurate English as I can," he told the jury.
During cross-examination, Jayyousi defense lawyer Marshall Dore Louis asked Mr. Sam whether he was familiar with the American term "to cherry-pick."
"It means selecting what you want to select," Mr. Louis said.


Yes," Sam agreed.
At the conclusion of his cross-examination, Louis returned to that theme. He asked if Sam was familiar with other American terms: paint with a broad brush, stereotype, prejudice, bigotry.
Sam answered that he was familiar with each term. 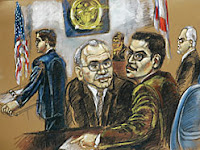 The move appeared to be an effort to encourage the jury – made up of three African-Americans, four whites, and five Latinos – to closely scrutinize whether the government was using stereotypes and prejudice against Muslims to try to win convictions.
Later when the jury was excused for the day, Assistant US Attorney Russell Killinger complained to the judge about Louis's questions. "They were totally improper and uncalled for," he told US District Judge Marcia Cooke.
"I was a little surprised myself," the judge said.
Louis said he didn't mean to imply the translator was himself bigoted. His questions were intended to highlight the way the government is presenting its case.
"That's [an] argument" that can be presented later in the trial, the judge told Louis. "This witness didn't deserve those kinds of questions," she said.
Jeanne Baker, a lawyer for Hassoun, disagreed. "There is a right we have to advance our themes," she said.
Judge Cooke said the questions crossed the line into impermissible argument. "Everyone is on notice," she said.

Dore Louis has been no shrinking violet in this trial....

And here's the AP covering Judge Cooke, with only nice things to say of course...