A bunch of smoke? 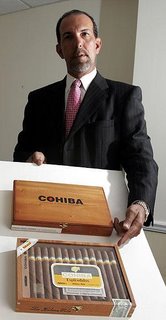 Jay Weaver in today's Herald reports on the fake Cuban cigar trials, one of which starts today. Here's the start of the article:

The nation's biggest cigar maker has been on a mission to put suspected Cuban cigar counterfeiters from Little Havana to Hialeah out of business.
Fort Lauderdale-based Altadis U.S.A. paid tens of thousands of dollars to fund part of an undercover Miami-Dade Police probe of five suspects charged with trafficking in counterfeit cigars, court records show.
The first of three federal trials, set for today, raises controversial issues about the integrity of the investigation, the fake Cuban cigar market, and the U.S. trade embargo against the Castro government.
The police department, which normally funds its own investigations, said Monday it could not comment on Altadis' role in the probe because its legal department had not reviewed the matter and also because it involves a federal case. The U.S. attorney's office declined to comment. Altadis U.S.A. executives did not return two calls Monday.
Coral Gables lawyer Frank Quintero, who represents a defendant facing trial later this month, accused Altadis of trying to ''buy'' a criminal investigation from police for one purpose: to crush the alleged counterfeiters so the company can monopolize the U.S. market for Cuban cigars after Fidel Castro dies.
''It calls into question the impartiality of an investigation when witnesses including an informant are being paid by a private party that claims to be an alleged victim in the case,'' Quintero said.

Here is the indictment. Defense attorney is Frank Quintero (pictured, showing both the authentic and fake cigars). AUSA is Sean Cronin.

You may want to follow-up on this one: "Acosta makes it into BBC news, picture and all."

the ausa trying the case is michael gilfarb not sean cronin

Since when does the United States protect Cuban Trademarks???

Cuban cigar especially HDM Churchill are my favourite. Cuban cigars provide such fantastic taste and perfect burn from start to finish. The flavors are simply intense, with earth, spice and licorice building into a dense thick smoke. They have so much character that it is really easy for anyone to illustrate difference between a Cuban and non Cuban cigar.