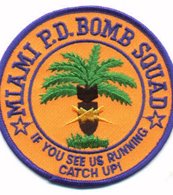 Julie Kay reports today that there was bomb scare at the federal courthouse. The article is below. Anyone know what case this is?

When police blew up a suspicious box that caused the evacuation of two federal buildings in downtown Miami, they may have blown up a federal criminal case. Authorities evacuated the courthouses Monday due to a bomb scare.
The Miami Police bomb squad responded and destroyed the box, but it may have contained evidence from a just-decided case. The James Lawrence King Federal Justice Building and the David W. Dyer Federal Building both were evacuated at about 2:30 p.m. for an hour or so on Monday. Hundreds of attorneys and courthouse staffers were ushered out of the buildings by federal marshals wearing yellow vests. They were directed to the street in front of the Federal Detention Center while the bomb squad did its work. Federal judges and magistrates were taken out of the building separately and taken to an undisclosed location.
“A special robot went over to the box, and it went kaboom,” said Mark Schnapp, a partner at Greenberg Traurig in Miami who was at the U.S. attorney’s office when the building was evacuated. But according to two lawyers who were present during the bomb scare and did not want to be named, it turned out that the box contained papers and evidence left on the sidewalk by a federal agent.
The two lawyers said the evidence was from a criminal case in which a verdict had just been reached. That evidence included fake guns and wiretap equipment. Lt. Bill Schwartz, a spokesman for the Miami Police Department, confirmed that the box left between the Miami Dade College campus and the James Lawrence King courthouse contained papers. But he said he had no details about the nature of the papers or who left them there. “Someone accidentally put something down,” Schwartz said. “We felt the need to evacuate the buildings.”
Alberto Hidalgo, a spokesman for the U.S. Marshals Service in Miami, confirmed that the box was blown up by the police bomb squad but said he had no information about what was in the box. Matt Dates, a spokesman for U.S. Attorney Alex Acosta, declined to comment on what the box contained. “We don’t talk about security matters,” he said. If the box did contain evidence in the criminal case, it’s unclear how the loss of the evidence may affect any appeal. Some observers found humor in the situation. “That’s smoking-gun evidence,” said Miami criminal defense attorney David O. Markus, “just not in the way that the agent was hoping for.”
Posted by David Oscar Markus at 3:15 PM

WOW HAS ANYONE SEEN THAT WEB SITE THATS GETTING NEWS EVERWHERE.

WHO IS RUNNING THAT SITE?