It includes pictures of the classified documents: 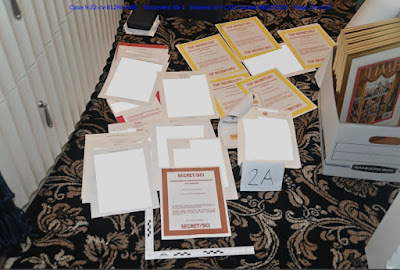 “The government also developed evidence that government records were likely concealed and removed from the Storage Room and that efforts were likely taken to obstruct the government’s investigation,” Justice Department counterintelligence chief Jay Bratt wrote.

“That the FBI, in a matter of hours, recovered twice as many documents with classification markings as the ‘diligent search’ that the former President’s counsel and other representatives had weeks to perform calls into serious question the representations made in the June 3 certification and casts doubt on the extent of cooperation in this matter,” he added.

***
DOJ indicated that the “commingling” of Trump’s personal effects with classified materials is “relevant evidence of the statutory offenses under investigation.” Three classified documents were found in a “desk drawer,” prosecutors said, without providing further details. Trump’s claims that the items should be returned to him have no merit, they added.

“Any Presidential records seized pursuant to the search warrant belong to the United States, not to the former President,” Bratt argued.

The submission to a federal judge in Florida opposes Trump’s request for an independent third party to review the records the FBI seized during their Aug. 8 raid on the former president’s Florida compound. DOJ urged U.S. District Court Judge Aileen Cannon to oppose Trump’s request for a so-called “special master,” contending that his belated request was merely a bid to disrupt the investigation.

In particular, Bratt urged Cannon to reject Trump’s claim that any of the documents seized were subject to a claim of executive privilege by him — and therefore unrecoverable by the current administration.

“The former President cites no case — and the government is aware of none — in which executive privilege has been successfully invoked to prohibit the sharing of documents within the Executive Branch,” Bratt wrote.

Posted by David Oscar Markus at 8:10 AM

That picture is clearly photoshopped. Will DOJ stop at nothing to persecute DJT?

Hilarious that he had docs marked top secret after telling them he had none. It’s like from naked gun…nothing to see here. Move on, move on.

Memo to the 11th circuit. It's African American, not African-American. It's 2022 people!

This IS the South in Florida lest we forget....

Next will be the McClain hearing.

Or, Trump backs Desantis under promise by Desnatis for pardons.

Or…a GJ subpoena and a 6003 Order to the attorney who signed the certification.

After a person has testified or provided information pursuant to a compulsion order—except in the case of act-of-production immunity—an attorney for the government shall not initiate or recommend prosecution of the person for an offense or offenses first disclosed in, or closely related to, such testimony or information without the express written authorization of the Attorney General. Such requests for authorization should be sent to the Assistant Attorney General for the division that issued the letter of authority for requesting the original compulsion order.

The request to prosecute should indicate the circumstances justifying prosecution and the method by which the government will be able to establish that the evidence it will use against the witness will meet the government's burden under Kastigar v. United States, 406 U.S. 441 (1972).