"Thank God that juries are smarter than judges." 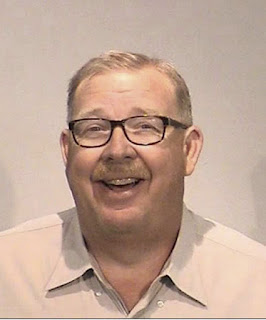 That was criminal defense lawyer Frank Carson after he was charged with murder, went to trial that lasted 17 months, and was acquitted by a jury.  It's an amazing (and very sad) story, covered by the L.A. Times in these three articles, here, here, and here.

Above is his mug shot, where he wouldn't give the prosecution the satisfaction of looking grim. Carson loved to stick it to the man.  And he believed that was payback after a long career of fighting and winning.  Sadly, he died shortly after winning his own trial, but not before he got to try another case as a lawyer.

This is how the third installment from the L.A. Times starts:

They were a year into the preliminary hearing with no visible end, and Frank Carson was close to despair. He was trapped where so many of his clients had been, alone in a chilly cell in a Stanislaus County jail. He had rebuffed every overture to cut a deal, to plead, to inform on codefendants in exchange for lenience.

But guilt pierced him. He blamed himself for the plight of his wife and stepdaughter, out on bail but charged in the so-called murder plot he had supposedly masterminded. He blamed himself for the continued incarceration of three other codefendants, former highway patrolman Walter Wells and Pop N Cork liquor store owners Baljit “Bobby” Athwal and brother Daljit “Dee” Atwal. All of them had refused to implicate Carson, telling prosecutors they had nothing to say.

“Boys,” Carson said one day, sitting before them in a courthouse holding room.

He had found a solution, he explained. He would take the blame, so they could go free. There seemed no other way out. He was in his 60s, with no kids; they were younger men, and fathers. The D.A. wanted him. What he did not tell them was that he had knotted up a sheet to keep under his pillow, to hang himself before they put him on a bus to prison.

“No, Mr. Carson,” his codefendants said. The brothers were Sikhs from the Punjab region of India. To let Carson take the blame for something he hadn’t done would dishonor the family, they explained — they’d be killed if they returned to their village.