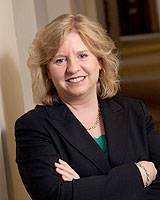 Looks like we may get another Judge Pryor (Jill) on the 11th Circuit (no relation to Judge Bill Pryor).  It's Alyson Palmer day at the SDFLA Blog.  From her article:

It appears the White House has landed on Atlanta litigator Jill A. Pryor as its new choice for Georgia's vacant seat on a federal appeals court.
Fulton County Superior Court Senior Judge Melvin K. Westmoreland told the Daily Report that he recently received an inquiry about Pryor from the American Bar Association committee that rates White House nominees for the federal bench. He said the ABA committee's representative wrote to say the committee was evaluating Pryor because she is being considered for a position on the 11th U.S. Circuit Court of Appeals.The administration of President Barack Obama has struggled to fill a Georgia-based spot on the 11th Circuit vacated in August 2010 by Judge Stanley F. Birch Jr., who retired.A year ago, the ABA committee vetted Mercer University law professor Daisy Hurst Floyd for the opening, but Obama didn't nominate her. Now the administration finds itself without a nominee at the start of an election year, historically a tricky time for getting a judicial pick through the Senate.Pryor, 48, is a partner at Bondurant Mixson & Elmore, a politically connected litigation boutique. She declined to comment for this story.Born in Harrisburg, Pa., Pryor received her undergraduate degree from the College of William & Mary before going to Yale Law School, where she was senior editor on the Yale Law Journal. A paper she wrote there on an obscure topic—the meaning of the constitutional provision that only a "natural-born citizen" can become president—received some attention during the 2008 campaign, when questions surfaced about whether Republican nominee John McCain, born on a military installation in the Panama Canal Zone, was ineligible for the office. "If I were on the Supreme Court, I would decide for John McCain," Pryor told The New York Times, adding that the question wasn't frivolous.After graduating from Yale in 1988, Pryor served a term as a law clerk to a relatively new, conservative 11th Circuit judge from north Georgia, J.L. Edmondson. She went on to work at Bondurant, where she has handled complex business cases both at trial and on appeal.

Now you need "pryor" legal experience to serve on the 11th circuit.