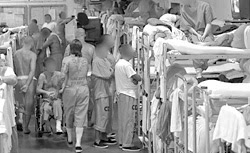 ... to show the overcrowding in California jails. There's one of them to the left. Yikes, that looks just awful.

Doug Berman asks whether visual aids are appropriate in opinions:

Because it has long been known that a picture is worth a thousand words, I certainly think it appropriate and useful for courts to consider adding visual aids to their rulings. And yet, I also recognize that a move to using more visual images in judicial opinions could open up a very interesting can of pictorial worms. In this Plata case and in some other settings, the visual aids added to opinion have usually been made part of the case's record by one of the parties. But I wonder if it would it be appropriate for an opinion to reprint a dramatic graphic or a special pictorial submitted into the record by the parties. Further still, might some justices or judges even consider creating their own special graphics or even a video to highlight and punctuate the pictures they are trying to create with their words?

Especially because I am a terrible artist, I hope graphic skills do not soon become essential to being an effective litigator. And yet, in this great new world full or new media, I do not think it is crazy to believe (and fear?) that visual images may begin playing a larger role in judicial decision-making.

I don't think there is anything to fear. Pictures and evidence from lower courts should be made part of opinions. It helps the reader and the public to see what is at issue. I like it.
Posted by David Oscar Markus at 9:26 AM

Is Doug Berman a litigator? That's news to me.

I think that's The Situation, third from the left.

its prison. not band camp.

when i read the opinion, it struck me as karmic that the Supremes, so often smacking down the 9th and its liberal haight ashbury regarded opinions, telles Cali to open the prison doors.

No comment on the startling dissent by your pal Scalia? Don't worry. I will filet him shortly.