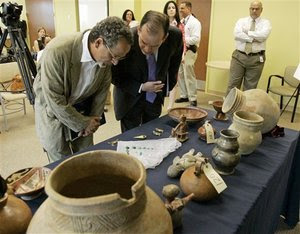 The actual caption under this photo in the Miami Herald today was:
U.S. Attorney Alexander Acosta, right foreground, and Diego Herrera, Director of the Colombian Institute of Anthropology, left, foreground, look at recovered artifacts in Miami, Tuesday, July 8, 2008. Federal authorities in Miami have recovered a treasure trove of pre-Columbian gold, artifacts and emeralds, which were returned to the Colombian government. The treasures will be handed over to authorities from the South American nation on Tuesday. Federal authorities say the items were recovered from an Italian citizen who was living in south Florida and illegally smuggling them into the country.

Can you come up with a better caption?
Posted by David Oscar Markus at 3:13 PM

"No, I have no idea why they wanted the US Attorney here for this event, what is this crap anyway?"

I heard something about some siezed Columbian pot and rushed right over...this is not what I had in mind.

Hey dude, did you hear about the fight at the courthouse?

Anonymous said...
This comment has been removed by a blog administrator.
4:12 PM

What are you tring to imply about the U.S. Attorney? Are you trying to say that he is a lame duck and has nothing better to do but look at a bunch of stuff? I object that you are trying to have some fun at
Mr. Acosta's expense. I demand that you immediately take this photo down and apologize to Mr. Acosta.

Acosta: "According to the Vice President, these are tools used by terrorists. We must carefully screen everyone to see if they possess these items.

Diplomat: "Cheney is an idiot."

“Wait, I thought you said this was pre-Colombian stuff, so why then are we giving it to the Colombian government? Shouldn’t the pre-Colombians be getting it?”

Now, if Tom Watts-Fitzgerald were the USA, he certainly would not be seen bending over art crap with some clown from Colombia. Just another sign that Obama is the next POTUS.

Did I read correctly in the Paper Of Record this morning that our progressive Liberal nominee from the DP voted for telecom immunity?

Voted for an onerous and voerreaching bill that was being pushed by a President who has a 26% approval rating?

I've said it before and I'll say it again - he has sold us a bill of goods.

1:33 -- voting for abrogating the 4th Amendment and usurping the Article III power of the federal judiciary just so the Dems don't appear "weak" on National Security? Oy.

Yet has anyone seen the headlines -- words like "Bush victory," Dems "capitulate" or "give in," all real strong words that don't convey weakness let me tell you.