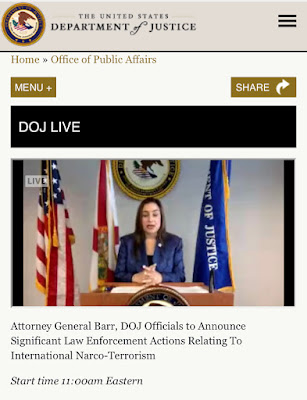 Big news while DOJ has been pretty quiet during the virus.

There was a virtual press conference with Barr, U.S. Attorney Berman from SDNY, and our very own U.S. Attorney Ariana Fajardo Orshan.  She gave a nice shout out to Michael Nadler, Michael Berger, and Peter Forand.

From the Miami Herald:


In a stunning announcement amid the coronavirus pandemic, the Justice Department plans to announce Thursday that Venezuelan President Nicolás Maduro and other government officials have been charged with turning Venezuela into a narco-state by collaborating with a leftist Colombian guerrilla group that exported tons of cocaine to the United States.

An indictment, to be unveiled at a “virtual” news conference in Washington, D.C., accuses Maduro and other top officials in his socialist regime of conspiring with the U.S.-designated terrorist group known as the FARC so that Venezuela could be used for narcotics shipments to finance a long-running civil war against the Colombian government.

Charged along with Maduro are Diosdado Cabello, a former speaker of the National Assembly who is considered the second most powerful political figure in Venezuela, and Vladimir Padrino Lopez, the country’s minister of defense. All three Venezuelan officials face allegations of narco-terrorism, drug trafficking and weapons violations in a scheme initiated in the mid-2000s that was meant to help the Colombian rebel group while enriching themselves with cocaine-tainted bribes, according to federal authorities.

Posted by David Oscar Markus at 11:15 AM

Any volunteers to go arrest him?

Goofy. Why indict if they have no genuine plan to arrest? Maduro is undoubtedly a scoundrel. But this feels like cheap politics/hot air in an election year.

And lets say that we do arrest him? Lets say we keep an eye out for him and scoop his ass up. We've done that, and more, before (Noriega). Do we really want to push the precedent that elected leaders (even leaders elected on terms that we don't like) can be deposed like this?

Alternatively, and more likely, we don't arrest him. Then we're just diluting our reputation as a nation to be taken seriously when we speak.

So, even if this was done with good intentions (i.e. calling Maduro out), this is probably not the smartest move.