Judge Cooke ruled today that Jose Padilla is competent to stand trial after a 4 day hearing on the issue. She said that the decision regarding the defense's motion to dismiss for outrageous conduct is for another day. More to follow when I come up for air. Sorry.
Posted by David Oscar Markus at 5:56 PM No comments:

I'm in trial, so not much time.... but here's the AP on the continuation of the Jose Padilla hearing today. Day 3 of the heairng tomorrow.

It was a gorgeous day for the ceremony dedicating the new courthouse in honor of Wilkie D. Ferguson Jr.
The program included remarks from Chief Judge Zloch, Shenita Hunt, Rod Vereen, Larry Handfield, Tawnicia Ferguson Rowan, Kendrick Meek, Lincoln Diaz-Balart, Aaron Podhurst, Francisco Angones, George Knox, Lurita Doan, Donald Graham, Rosemary Barkett, George Knox (who read a letter from Bill Clinton), Thomasina Williams, Betty Ferguson, H.T. Smith, John Kozyak, and Father Kenneth Major. Yes, it was a long ceremony...
I had the pleasure of trying one case in front of Judge Ferguson. He was a great judge, smart, and a true gentleman. The speakers did a very nice job remembering him.
For (unintended) comic relief, Edwin Fielder -- the Regional Administrator for GSA -- introduced the speakers. I'm not exaggerating if I say that he only got 50% of the names correct. He was a disaster. Other than that, every thing went pretty smoothly.
The courtrooms and chambers are beautiful. Let's see if we can use them by the end of the year. That's the current over-under. Any takers?
Posted by David Oscar Markus at 12:08 PM 1 comment: 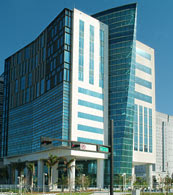 Today at 3PM will be the formal dedication ceremony of the new federal courthouse. As Julie Kay points out in the DBR, however, it is not set to open yet and there is no date for opening.
Posted by David Oscar Markus at 9:27 AM No comments:

"Experts: Years of isolation made Padilla incompetent for trial"

That's the headline for the AP article. Here's the Sun-Sentinel coverage. The Herald's pre-hearing coverage is here.

My spies tell me that only two defense witnesses were heard from today. Apparently it was a very good day for the defense today, as expected. The exciting stuff -- the jailors' testimony -- isn't until next week. And because the Government is fighting that so hard, expect that to be a defense day as well. So, what's the judge going to do? Any thoughts?
Posted by David Oscar Markus at 8:56 PM No comments:

Jose Padilla's competency hearing is today. I doubt that I'll be able to make it over to court, but it should be a fascinating hearing. I look forward to reading the reports. I will post any news as soon as I see it. If anyone is in the courtroom and wants to give an anonymous report, I'd be happy to post it.
Posted by David Oscar Markus at 8:18 AM No comments:

Yesterday, commentors jumped on me for quoting a great scene in A Few Good Men. Well, here's another one: Col. Jessep: Take caution in your tone, Commander. I'm a fair guy, but this fucking heat is making me absolutely crazy.
Posted by David Oscar Markus at 9:48 AM 1 comment:

"Methinks the lady doth protest too much"

That was Judge Cooke in response to prosecutors strenuous objection to allowing Jose Padilla's jailors to testify at this week's competency hearing. I believe the hearing is Friday, and it's going to be a doozy.

Whenever I hear that someone strenuously objected, I think of the scene in A Few Good Men when Demi Moore loses and objection and responds by telling the judge that she strenuously objects. Her co-counsel, Lt. Weinberg, says to her after court: "I strenuously object?" Is that how it works? Hm? "Objection." "Overruled." "Oh, no, no, no. No, I STRENUOUSLY object." "Oh. Well, if you strenuously object then I should take some time to reconsider."
Posted by David Oscar Markus at 5:10 PM 6 comments:

Motion to sever from "dirty bomber" William Swor and Dore Louis have filed a motion to sever their client Kifa Jayyousi from Jose Padilla, arguing in part that the media frenzy surrounding the alleged "dirty bomber" will invariably and prejudicially spill-over to him. One media outlet has had the audacity to ask the Court permission to bring in a cell phone and laptop so you know there is going to be some wild stuff going on in at the (new?!) courthouse! [To go off on a tangent for a second, it amazes me that the feds are so afraid of cellphones. Yes, we lawyers can bring them in, but shouldn't everyone be permitted to carry their phone? In Ft. Myers it's even worse. Lawyers can't bring their phones into the courthouse? WHY NOT?!!?!? I do not get it. More on this later.]

In other news, I figured out it wasn't the oysters that got me sick. It was the damn peanut butter sandwich that the hotel gave out free one night. Salmonella. No kidding. In freaking peanut butter!
Posted by David Oscar Markus at 4:29 PM No comments:

The panel selecting the new Magistrate in Ft. Lauderdale includes:

Guy A. Lewis, Esq.
Posted by David Oscar Markus at 9:44 AM No comments:

Sorry for the slow posting... I was in New Orleans on Thursday for a conference. I got food poisoning, which hit me Saturday morning. Just starting to recover today (while making the long boring drive to and from Ft. Myers in the Middle District). Hopefully I'll have a new post in the next couple of days.
Posted by David Oscar Markus at 4:09 PM 1 comment:

Kathy Williams, the Federal Defender for the Southern District of Florida, was sworn in today for another term (by 11th Circuit Judge Rosemary Barkett). Everyone who knows Kathy knows how great she is. Of course, I'm biased because I worked for her. But the judges and the AUSAs all respect her and the job she has done for this district. What most people don't know is that she is one of the leaders for the entire indigent defense community nationwide. This district is *very* lucky to have her.
Posted by David Oscar Markus at 6:26 PM No comments:

That's Albert Krieger after being asked to give a statement for the husband-and-wife leaders of a Brazilian evangelical megachurch who pleaded not guilty Tuesday to currency smuggling and other charges. Estevam Hernandes Filho and Sonia Moraes Hernandes are the founders of the Reborn in Christ Church. Here's the Herald article.
Posted by David Oscar Markus at 6:21 PM No comments:

Still trying to recover from eating so much this weekend.....

In the meantime, there's some good stuff from our local reporters:

1. Vanessa Blum had this weekend story about Jose Padilla and torture.

3. Julie Kay has the scoop on who has put in for Magistrate Judge in Ft. Lauderdale. So far, we have Assistant federal defenders Patrick Hunt, Stewart Abrams, and Dave Brannon. From the US Attorney's office we Robin Rosenbaum and Patty Diaz. There are rumors, according to the article, that a private practitioner has also put in. Anyone know who?
Posted by David Oscar Markus at 9:28 AM No comments:

"He's waiting for Fidel to die so he can meet him in hell and beat him up."

A quote from one of my favorite lawyers, Jack Blumenfeld, about his client Jose Battle. Here's another interesting article from Category 305.
Posted by David Oscar Markus at 5:04 PM No comments:

Email ThisBlogThis!Share to TwitterShare to FacebookShare to Pinterest
Labels: Jack Blumenfeld, Jose Battle
Newer Posts Older Posts Home
Subscribe to: Posts (Atom)
The Southern District of Florida blog was started in 2005 by David Oscar Markus, who is a criminal trial and appellate lawyer in Miami, Florida. He frequently practices in federal courts around the country, including his hometown, the Southern District of Florida and the 11th Circuit Court of Appeals. He is a former law clerk to then-Chief Judge of the District, Edward B. Davis.