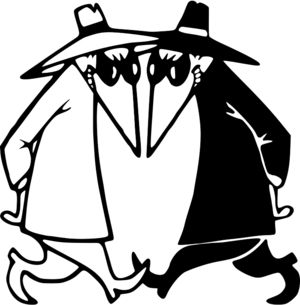 There seems to be quite a bit of spying going on in South Florida.

There are the Mar-a-Lago spies.

The Secret Service is leading the investigation and no arrest has been made, according to the Palm Beach Police Department.
***
While law enforcement officials would not discuss the nature of the investigation, Mar-a-Lago security has been breached repeatedly since Trump became president. The private club and mansion has witnessed several high-profile trespassing incidents.

And there are the Key West spies:


Since the fall of 2018, a total of four Chinese nationals have been arrested on charges of shooting pictures of military facilities in Key West, drawing the sharp interest of U.S. counterintelligence investigators who have been probing suspected Beijing-led spying activities in South Florida, including visitors to President Donald Trump’s private club, Mar-a-Lago, in Palm Beach.

On Saturday, Yuhao Wang and Jielun Zhang, both 24, were arrested after they approached the guard station at Sigsbee Annex in the Naval Air Station, were told to turn around and instead drove onto the restricted property at 8:30 a.m. After a half hour, U.S. Navy Security Forces located the students in their blue Hyundai car and found they were carrying cellphones and a Nikon camera.

“U.S. Navy Security Forces obtained consent to look at the devices and observed photographs taken on the Sigsbee Annex property, including U.S. military structures on Fleming Key,” according to an FBI complaint affidavit.

After they were stopped, both acknowledged they were told by a guard at the Sigsbee Annex gate to make a U-turn and leave the area. Instead, Wang admitted that they drove onto the U.S. Naval property and parked their car. Wang voluntarily showed the agents photos that he took with his cellphone, the affidavit says.

Zhang gave a similar statement, indicating that he provided his Michigan driver’s license to the guard. He also voluntarily showed the agents photos that he took with his camera and videos with his cellphone, according to the affidavit.

The idea of any federal judge trying to micromanage a multi-billion dollar multinational corp makes me laugh out loud.