Judge Lagoa, 52, is a Miamian, who currently sits on the 11th Circuit. She previously sat on the Florida Supreme Court and 3rd DCA. And before becoming a judge, she was an AUSA in the SDFLA. She's married to Paul Huck Jr. (son of District Judge Paul Huck Sr.) and they have three daughters. Here's a picture of Gov. DeSantis announcing her to the Florida Supreme Court with her and her family in the background: 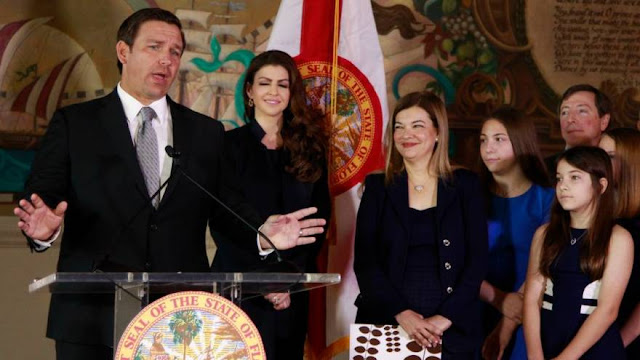 We've never had a Floridian on the Supreme Court, which is something I've been pushing for since the start of this blog back in July 2005.
More on the politics of this choice from Politico: Lagoa is on a list of names that Trump released earlier this month as possible replacements. But unlike Barrett, people close to the process say Lagoa has demographic and geographic advantages in her favor when it comes to the politics of Senate confirmation and the presidential election: Lagoa hails from Trump’s must-win state of Florida and she’s Cuban American. “Justice Lagoa is perfect,” said one source, who has discussed the matter with White House officials but was not authorized to speak on record. “The president wants a conservative jurist and he wants to win the biggest battleground. How do Democrats in the Senate vote against a Latina?” A second Republican who has close ties to Florida said that “Lagoa is at the top of the list. She checks a lot of boxes.” But some conservative groups could object based on what they see as Lagoa’s insufficient record on abortion, the ultimate litmus test on the right. One prominent GOP senator, Josh Hawley of Missouri, has already said he would only vote for a nominee who has affirmed that Roe v. Wade was “wrongly decided.”
Posted by David Oscar Markus at 11:38 AM

Okay, so you have the one shot you ever will have to rise to the court. "Of course senator Hawley, I agree that is was wrongly decided, I just can't say that publicly because I can't comment on issues that may arise". Now, does that mean that she would vote to disregard the precedent? No. Is there anything wrong with that answer if she really believes it? No. Will she get a vote is the more significant question.

Now that GOP 2 senators have said no to a vote and a 2 vote swing set to happen with the Arizona election (by November 30 Kelly is he wins will be voting)...you will see a rocket confirmation process.

The Republicans have been ruthlessly efficient and focused with their judicial nominations....I fully expect them to fill this seat quickly.

Too bad we can't get David Oscar Markus on the Supreme Court!

That would be awesome.

He is too old.

Barbara isn't a right-wing zealot like Amy Barrett. I think she would be a justice more in the mold of Sandra Day O'Connor than Clarence Thomas.

Given how partisan this is going to be, where the vote is inevitably going to happen during the lame duck session, I would think deciders on this would want the most conservative justice possible.

If Lagoa was nominated, the dems would immediately withdraw all their objections, and would be thrilled another "wise latina woman" would be headed to scotus!

I mean, identity politics isnt a total sham, is it?