Everyone will be talking about whether Trump has enough time and the votes to get someone confirmed in the next couple of months.  But before we turn to politics, let's take a moment and remember the incredible woman, an inspiration to so many.  What a truly amazing person.  RIP. 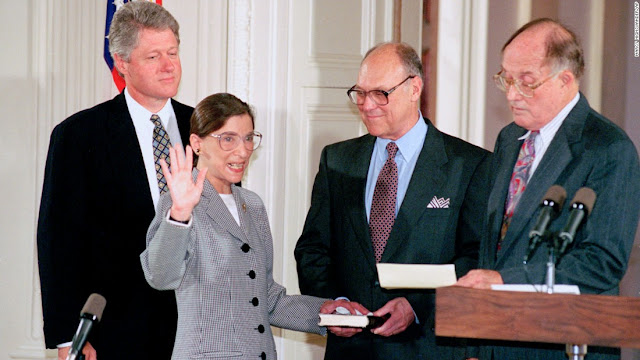 Justice Ruth Bader Ginsburg, the demure firebrand who in her 80s became a legal, cultural and feminist icon, died Friday. The Supreme Court announced her death, saying the cause was complications from metastatic cancer of the pancreas.

The court, in a statement, said Ginsburg died at her home in Washington surrounded by family. She was 87.

"Our nation has lost a justice of historic stature," Chief Justice John Roberts said. "We at the Supreme Court have lost a cherished colleague. Today we mourn but with confidence that future generations will remember Ruth Bader Ginsburg as we knew her, a tired and resolute champion of justice."

Architect of the legal fight for women's rights in the 1970s, Ginsburg subsequently served 27 years on the nation's highest court, becoming its most prominent member. Her death will inevitably set in motion what promises to be a nasty and tumultuous political battle over who will succeed her, and it thrusts the Supreme Court vacancy into the spotlight of the presidential campaign.

Just days before her death, as her strength waned, Ginsburg dictated this statement to her granddaughter Clara Spera: "My most fervent wish is that I will not be replaced until a new president is installed."

Especially in light of the fact that we are likely in for a period of ugliness that Hieronymus Bosch would quail to paint, it's worth remembering this:

RBG, one of the most liberal justices ever to sit on the court, and Antonin Scalia, one of the most conservative, were, for decades, devoted friends. Not just they respected one another, not just that they paid one another professional courtesies. They held each other in deep regard. They shared real affection.

Although they were of an age (he was three years her junior), they otherwise had almost nothing in common. And the deeply held central beliefs that drove each of their Constitutional philosophies could hardly have been more opposed. They wrote scathing dissents about each other's opinions.

But by all accounts they were still able to love one another as friends, bound by their common humanity.

I doubt we'll see much of that humanity from anyone on the national scene in the coming weeks. But it is worth remembering.

Barret or Grant take it to the bank

If Trump doesnt complete the appointment by Nov3, it’ll for sure be done by x-mass, regardless of Election outcome.

She was an iconic figure and will have a place of honor in history.
Also a little known fact- She was the only justice to openly condemn the treatment of Brett Kavanaugh and the first to welcome him as a justice when he was confirmed.