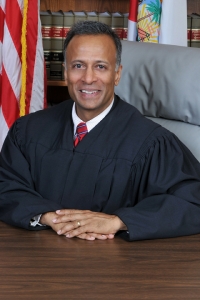 Great news -- Judge Raag Singhal is being vetted for an open district court seat in Ft. Lauderdale.  He currently sits on the Broward state bench (he was appointed by Rick Scott back in 2011 and was re-elected in 2014) and has wide support on both sides of the aisle.  He's a former state prosecutor and private defense lawyer.  Plus, he's a really good guy.  Here's hoping that he gets nominated and confirmed quickly.  After that, there will still be one opening left.  It's unclear whether the JNC will be reconstituted or whether Senators Rubio and Scott will just select someone.

CONGRATULATIONS TO JUDGE SINGHAL!
Posted by David Oscar Markus at 11:14 AM

No one cares whether you would or would not indict President Donald J. Trump. Spare us your sanctimony, you're not that important. MAGA.

Dear MAGA, you do not speak for all. So saying "no one cares" is just blatantly false, but since you are a MAGA that is your motto. Clown.

Great guy. He would be an outstanding choice.

MAGA is right. Can you imagine ho much more MAGA we would be if there had been no collusion/delusion investigation? He really should get an extra 2 years tacked on. MAGA!

His prison sentence should be increased by the 2 years he has tried to ruin our democracy by committing treason and putting his head so far up Putin's ass that it hit Hannity's head.

These libs are out of control. Subpeena for DJTJ? THe collusion delusion continues. MAGA

He'll be another Judge D- and I say that in a good way. With a minefield of ignorant MAGAs out there outdoing each other in trashing immigrants wrecking the constitution to try and get the president's attention, this would be a great choice.

Who are you? Us MAGAs are trying to protect this country from the out of control DEMs. Hopefully Mr. Raag is tough on the border and strong on 2nd Amendment. Without a strong 2nd Amendment we really don't have any other rights.