1.  Gorsuch is channeling his inner-Scalia.  The opinion is Dimaya v. Sessions.  District judges should get ready for the ensuing litigation.  It shows again that the trial and appellate courts are so law-and-rder conservative with its rulings that it takes a slightly less conservative Supreme Court to stop the get-away conviction train every now and then. This time it took Justice Gorsuch. From SCOTUSBlog:


Gorsuch concurred in part and concurred in the judgment. He emphasized at the outset that “[v]ague laws invite arbitrary power.” He defended the originalist foundations for vagueness challenges that Justice Clarence Thomas questioned at length in his dissent, tracing the history of those challenges back to Blackstone’s condemnation of vague statutes and the “tradition of courts refusing to apply vague statutes.” He further noted that the concern with vague statutes was not “confined to the most serious offenses like capital crimes.” Addressing the government’s argument that a more lenient standard of review should apply in civil cases, Gorsuch would have gone even further than the plurality. He suggested that provisions of civil laws should be scrutinized closely for vagueness even outside the deportation context: “Why, for example, would due process require Congress to speak more clearly when it seeks to deport a lawfully resident alien than when it wishes to subject a citizen to indefinite civil commitment, strip him of a business license essential to his family’s living, or confiscate his home?”

3.  RIP Harry Anderson.  When I was growing up, I thought that every judge should be like him (with a little Judge Wapner).  He was the best.  From the LA Times:


"Night Court" and "Dave's World" star Harry Anderson received a tip of the hat from costars and fellow magicians sending out heartfelt tributes to the late sitcom star.

The actor, who died on Monday at age 65, began his lengthy career in stand-up and magic, then notably played judge Harry T. Stone on the Emmy-winning NBC sitcom "Night Court." 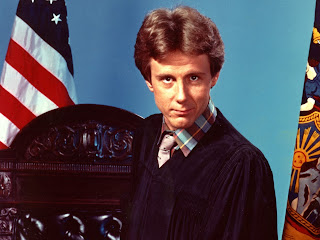 Costar John B. Larroquette and several others fondly remembered the actor — and his iconic fedora — with messages honoring Anderson's memory.

"He was wicked smart. He was wicked funny. He had a big laugh. He had a big heart. He delighted in legerdemain especially when he caused someone to scratch their head and proclaim; How the hell did you do that? And he could eat a hamster like no one I ever knew," the actor tweeted late Monday, describing their work on the show as "a carnival fun ride with Harry."

Posted by David Oscar Markus at 8:12 AM