Well, the good news is that the Chief Justice of the United States made a Ferris Bueller reference during oral argument. The bad news is that he got it wrong!

The oral argument was in Collins v. Virginia, addressing the question of whether the Fourth Amendment’s “automobile exception” permits a police officer, uninvited and without a warrant, to enter private property, approach a house and search a vehicle parked a few feet from the house.

Roberts question was about the mobility of cars:


“I mean, if you have an automobile in the house, which is not, you know, Jay Leno’s house, right, where he’s got dozens of rare cars, or the Porsche in ‘Ferris Bueller,’ he says. “Are you saying that you … can just go in because they got it in there somehow and they can get it out?”

Awesome stuff!  Except it wasn't a Porsche!! It was a Ferrari...

This shows the power of amicus briefs, which raised the Bueller hypo and even used a picture: 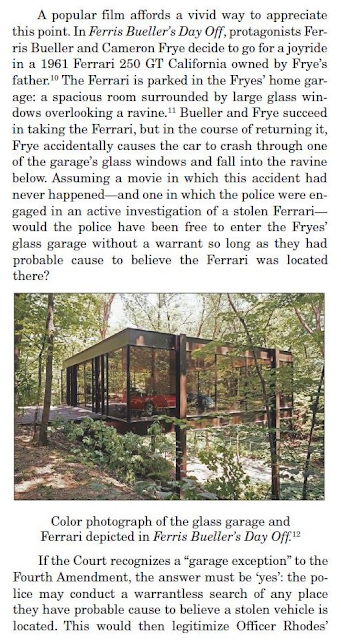 Posted by David Oscar Markus at 9:15 AM

i know this is all in jest, but there is a procedure in place to fix scrivener's errors in supreme court opinions.