Senior Judge Roger Vinson has this interesting and sure-to-be-challenged order removing a cross from a Northern Florida park:

A cross that has stood in Bayview Park for the last 48 years must be removed within 30 days, a federal judge has ruled.
U.S. District Court Judge Roger Vinson ruled Monday that the cross in the city park violates the Establishment Clause of the Constitution and must be removed within 30 days.
The American Humanist Association, a group that works to protect the rights of humanists, atheists and other non-religious Americans, and the Freedom From Religion Foundation filed a lawsuit in 2016 on behalf of four Escambia County residents who said the cross at Bayview Park violated the separation of church and state.
Attorneys for the city of Pensacola and the American Humanist Association presented their oral arguments to Vinson on Wednesday.
Vernon Stewart, spokesman for the city of Pensacola, said on Monday that the city had received a copy of the order.
"We are currently in the process of reviewing this with our legal counsel," Stewart said. "However, Mayor Hayward is traveling, and he will be the one to ultimately decide how to proceed."
Monica Miller, senior counsel with the American Humanist Association's Appignani Humanist Legal Center, said in a press release that she was pleased with court's ruling.
"The cross was totally unavoidable to park patrons, and to have citizens foot the bill for such a religious symbol is both unfair and unconstitutional,” Miller said. 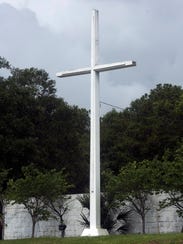 The Bayview Park Cross is the subject of a lawsuit over religious freedom. The American Humanist Association and the city of Pensacola gave oral arguments Wednesday in federal court in Pensacola. (Photo: Tony Giberson/tgiberson@pnj.com)


Posted by David Oscar Markus at 8:17 AM