Manuel Noriega has died.  Here's a sketch of him by Arthur Lien from his 1992 trial before Judge Hoeveler. 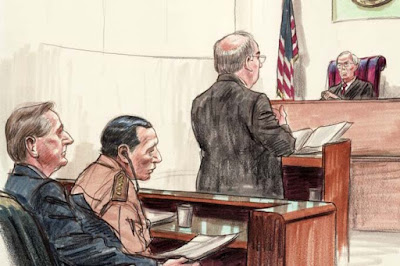 He received a sentence of 30 years and served 17. Because he was a prisoner of war, he had to receive a jail cell in accordance with the Geneva Convention. That meant he had his own cell with TV, a computer, and exercise equipment. Corrections officers called it "the presidential suite."
Posted by David Oscar Markus at 8:12 AM