"Is Gollum good or evil?"

That's the headline of this nerdy fan-boy NY Times piece.

A Turkish man’s freedom may hang on a question put to a panel of “Lord of the Rings” experts: Is Gollum evil?
More significantly, was it an insult to compare Turkey’s president to the slimy, bug-eyed creature from the films based on J.R.R. Tolkien’s trilogy?
A physician, Dr. Bilgin Ciftci, is accused of sharing a meme that juxtaposes Gollum, as played by Andy Serkis (and advanced digital effects), with Recep Tayyip Erdogan in several situations: while laughing, while surprised, while eating. Insulting the president is a crime under Turkish law. 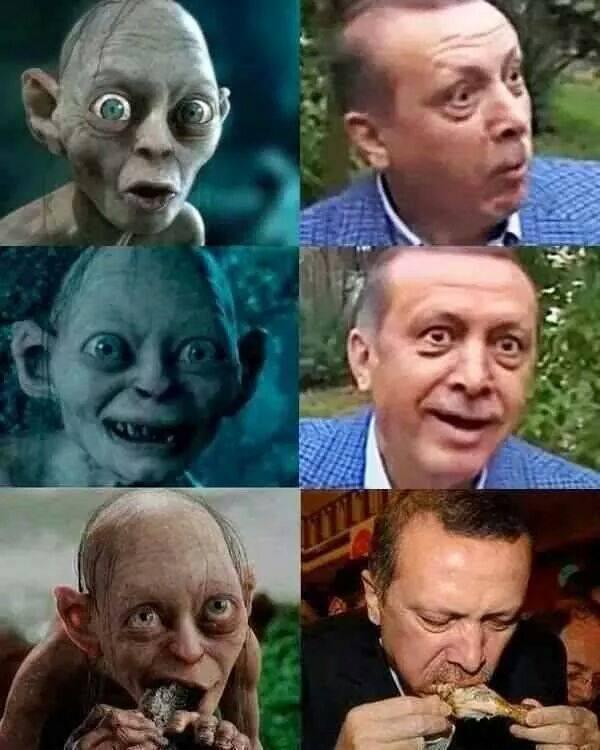 The punishments were swift. Dr. Ciftci lost his job with the Public Health Institution of Turkey after sharing the meme, and he faces a two-year prison sentence, the Turkish newspaper Today’s Zaman reported. After a judge said he did not know enough about the Tolkien creature to make an appropriate decision, five experts were ordered to conduct an investigation into Gollum’s moral character before the next phase of the trial begins in February.

Michael D. C. Drout, an English professor at Wheaton College who edits an annual review of Tolkien’s works, is observing the situation from America. He said that those experts will be assessing the most complicated character in the English writer’s already complex world.

“I don’t think there’s any consensus that Gollum is evil,” Mr. Drout said in an interview. “He is the most tragic character in ‘The Lord of the Rings.’ ”

Middle Earth, the place where Gollum began his life as a creature named Sméagol, is full of complex characters and allegiances. But a single gold ring, forged with a dark lord’s evil powers, has the power to rule them all. Sméagol catches a glimpse of the ring, murders for it, and possesses it for centuries until it is mislaid and found by another hobbit. Sméagol struggles to redeem himself, but his obsessive bloodthirst for the ring wins out. He accidentally destroys himself and the ring, but also saves Middle Earth in the process. (It is the hobbit hero Frodo who gets most of the credit.)

“The context is this: Gollum accidentally, not intentionally, saves the entire world,” Mr. Drout said.


Posted by David Oscar Markus at 9:37 AM

I don't think he is either. Clearly suffering from a mental defect. He doesn't know right from wrong.

Isn't it great that they are our NATO ally? I hate to say it, but I am with Putin on this one - Turkey sucks.