It's become a big hit -- a capacity crowd on Friday for interns, law clerks, and young associates.  Here's a picture from the panel of judges (Huck, Jordan,Scola & Valle): 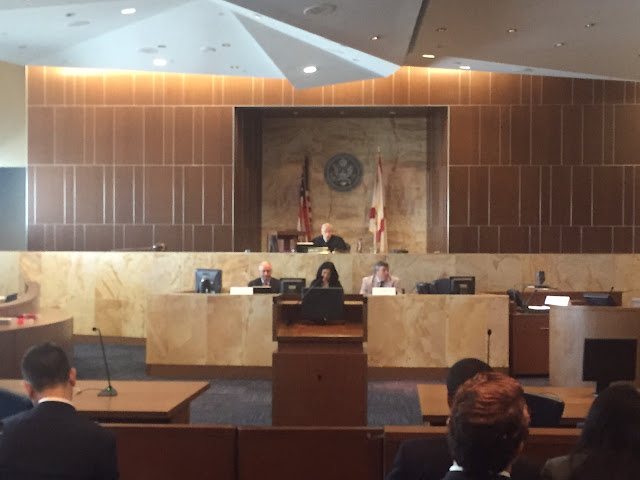 You should get on over to SCOTUSBlog for new opinions this morning.  The Term is just about over....

After that, you should grab a drink at lunch today.  That's what Justice Stevens (age 95) says to do!  From the Chicago Sun-Times:

Over the next 35 years, Stevens rendered more than 1,400 opinions in a career that defies summation, at least here.  He was liberal and, as such, his beliefs could actually mature and change. Williams highlighted the evolution of Stevens’ thought regarding death penalty, from finding it constitutional in Gregg V. Georgia in 1976, to  deeming it “cruel and unusual” — and thus banned by the Constitution — for people with mental handicaps in Atkins v. Virginia in 2002, to finding it morally wrong altogether in Baze v. Rees in 2008.
“The penalty really does not fit in our society anymore,’ Stevens said.
His advice to young lawyers ranged from the value of studying poetry — which he found “extremely valuable” on the bench because “it helped me in my work as a judge” — to the best way to counteract a bad day: “drink at lunch” (advice he couldn’t have taken too often, or he wouldn’t have made it to 95).

I'll certainly need one after that Game of Thrones last night.
Posted by David Oscar Markus at 9:23 AM

You watched GOT instead of the Finals? Interesting.

Why wait until lunch?