That's the provocative headline to this Nancy Gertner op-ed.  If Tsarnaev would have pleaded guilty to life without parole and where Massachusetts doesn't have the death penalty, should we have used all of these federal resources on a trial?  A snippet:

Perhaps Attorney General Eric Holder wanted to show that the government does not need Guantanamo or military tribunals to secure the death penalty for those accused of terrorism. Perhaps he believed that any lesser punishment would expose the administration to criticism about the softness of the civilian system and reopen the floodgates to military tribunals. But that political calculation hardly justifies what the government seeks here, its costs, its emotional toll on the victims and on the city, the likelihood of extensive appeals, even the risk of error, particularly when there was another alternative — a plea of guilty in exchange for life without parole.
Following such a plea, the victims would have spoken at length at a sentencing proceeding, directly confronting Tsarnaev. Their narratives would have been no less compelling than what we have heard the past few weeks. The focus would have been on them, and only them. And once life without parole was imposed, the case would have been over, completely and totally. There would have been no appeals. 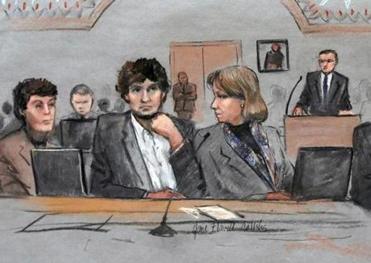 ***
In some ways, this phase may be more difficult than the first phase. At this point, the focus necessarily shifts to Tsarnaev and away from the victims. More troubling, the jury’s life-and-death decision could be taking place at the same time as the second anniversary of the bombing. Boston is gearing up for the Marathon, and jurors will be passing the banners, the familiar sights of Marathon Monday, coupled with the city’s commemoration of the tragedy. Jurors are supposed to tune out the press. While it is difficult in a high-profile case, here their efforts will have to be extraordinary. And any juror’s exposure to the emotional and intense coverage could put the entire trial at risk on appeal.
The choices for the government should not be a death finding in a civilian court, or a death finding in a military tribunal, lethal injection or a firing squad. Countless others accused of heinous crimes have pled guilty to a life without parole. There was another way. There still is.

Posted by David Oscar Markus at 9:31 AM