1.  Although Dore Louis withdrew his request for NSA records and although the judge denied his motion based on that withdrawal, the feds filed another classified pleading to "clarify" what it said in the earlier classified filing.  Of course that clarification is redacted, so we have no idea what needed to be explained.

2.  The Federal JNC has been reconstituted.  Finally. Now can we get William Thomas confirmed? Here are the Southern District's members:
UPDATED -- THIS LIST BELOW IS INCORRECT.  The correct list is here.

3.  Tom Almon received the Eugene Spellman Criminal Justice Act Award.*  I'm really happy to post about Tom Almon, who has been a CJA lawyer for a long time and has really provided a wonderful service to indigent defense.  Here's a picture: 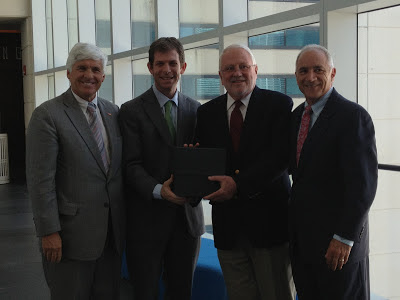 I never met Judge Spellman, but he was very close with Judge Davis who told lots of great stories about him.  Here's the NY Times obituary for Judge Spellman:

Judge Eugene P. Spellman, an 11-year veteran of Federal District Court who was known for innovative sentences and supporting social causes, died of cancer today at Mercy Hospital. He was 60 years old.
Judge Spellman was absent from the bench only a week before his death.
He crafted a novel sentence that withstood a challenge in the tax-evasion case of the industrialist Victor Posner, a millionaire who was ordered to give $3 million to the homeless and to serve meals in a shelter.
In other cases, the judge decried "underhanded tactics" used by Federal immigration officials against Haitian immigrants and released on bond a prisoner with AIDS after ruling that the Bureau of Prisons did not offer the prisoner adequate medical treatment.
In a case involving religious freedom, Judge Spellman ruled that public health and needs outweighed the tenets of the Afro-Cuban Santeria religion and upheld ordinances banning animal sacrifices in the Miami suburb of Hialeah.
He presided over the 1985 trial of Hernan Botero, a Colombian financier who was convicted of laundering $57 million in drug money, as well as drug cases involving former Government ministers of the Turks and Caicos Islands in the Caribbean and a former agent for the Federal Bureau of Investigation.

I pulled up an old administrative order when Judge King was Chief, appointing Judge Spellman to the CJA committee.  Lots of heavy hitters also on the committee...

*I also received the award this year.  I have a policy about not posting about me or my cases, but I wanted to post about Tom.  Also, Judge Scola ordered me to put this up.  It is a real honor for me to have received this award.


4.  The 9th Circuit really gives meaning to Rule 16 and Brady.  Check out the latest, from Judge Kozinski, here. Another conservative judge is frustrated with how our criminal justice system is operating.  But when is the last time you saw an 11th Circuit opinion like this?

We vacate the conviction and remand for an evidentiary
hearing into whether the prosecution’s failure to disclose the
certificate in discovery or at any point before the proofs had
closed was willful. If it was willful, the district court shall
impose appropriate sanctions. The district court shall, in any
event, dismiss the illegal reentry count of the indictment on
account of the STA violation, with or without prejudice,
depending on its weighing of the relevant factors. See
18 U.S.C. § 3162(a)(2); United States v. Lewis, 349 F.3d
1116, 1121–22 (9th Cir. 2003).
We are perturbed by the district court’s handling of the
reopening issue. The court persisted in giving a reason for
allowing the government to reopen that was contradicted by
the record, despite defense counsel’s repeated attempts to
point out the error. The court also ignored defendant’s twiceraised
Rule 16 objection and made a questionable ruling
regarding defendant’s Speedy Trial Act claim.
“Whether or not [the district judge] would reasonably be
expected to put out of his mind” his previous rulings, and
“without ourselves reaching any determination as to his
ability to proceed impartially, to preserve the appearance of
justice, . . . we conclude reassignment is appropriate,” and we
so order. See Ellis v. U.S. Dist. Court (In re Ellis), 356 F.3d
1198, 1211 (9th Cir. 2004) (en banc).

5.  Everyone is focused on the blockbuster cases before the Supreme Court.  But how about the debate about Clue:


[Jusice Kagan] resorted to the game Clue—or the plot line of the musical version of Clue, to be exact—to illustrate her point. Kagan wrote: "(Think: Professor Plum, in the ballroom, with the candlestick?; Colonel Mustard, in the conservatory, with the rope, on a snowy day, to cover up his affair with Mrs. Peacock?)"
It was an example of the vivid writing, aimed at making complex concepts understandable that Kagan has adopted in her first years on the high court.
But Alito, the sole dissenting justice, was apparently not impressed. Making the point that different ways of committing a crime do not make them different crimes, Alito wrote a footnote responding to Kagan’s reference.
“The board game Clue, to which the Court refers… does not provide sound legal guidance. In that game, it matters whether Colonel Mustard bashed in the victim’s head with a candlestick, wrench, or lead pipe. But in real life, the colonel would almost certainly not escape conviction simply because the jury was unable to agree on the particular type of blunt instrument that he used to commit the murder.”


A nice comeback by Alito, but why is he making faces at Justices Ginsburg and Sotomayor:

The most remarkable thing about the Supreme Court’s opinions announced Monday was not what the justices wrote or said. It was what Samuel Alito did.

The associate justice, a George W. Bush appointee, read two opinions, both 5-4 decisions that split the court along its usual right-left divide. But Alito didn’t stop there. When Justice Ruth Bader Ginsburg read her dissent from the bench, Alito visibly mocked his colleague.
Ginsburg, the second woman to serve on the high court, was making her argument about how the majority opinion made it easier for sexual harassment to occur in the workplace when Alito, seated immediately to Ginsburg’s left, shook his head from side to side in disagreement, rolled his eyes and looked at the ceiling.

His treatment of the 80-year-old Ginsburg, 17 years his elder and with 13 years more seniority, was a curious display of judicial temperament or, more accurately, judicial intemperance. Typically, justices state their differences in words — and Alito, as it happens, had just spoken several hundred of his own from the bench. But he frequently supplements words with middle-school gestures.

Days earlier, I watched as he demonstrated his disdain for Elena Kagan and Sonia Sotomayor, the two other women on the court. Kagan, the newest justice, prefaced her reading of an opinion in a low-profile case by joking that it was “possibly not” the case the audience had come to hear. The audience responded with laughter, a few justices smiled — and Alito, seated at Kagan’s right elbow, glowered.

Another time, Sotomayor, reading a little-watched case about water rights, joked that “every student in the audience is going to look up the word ‘preemption’ today.” Alito rolled his eyes and shook his head.

Posted by David Oscar Markus at 6:30 AM

Congrats to AUSA Robert Luck, who was just appointed to a Circuit Court Seat in Miami.

AND YOUR NEW CIRCUIT COURT JUDGE IS .....

He chose a 33 year old AUSA who has been practicing law for eight years. Luck clerked for Federal Judge Ed Carnes of the Eleventh US Court of Appeals. He then worked for Greenberg Traurig for a year before moving to the US Attorneys Office. He has been there since 2006.

Luck is a Gator having attended UF for both Undergrad and Law School.

Thanks for the Judge Spellman remembrance -- I miss him.