Local AUSA Mike Garofola to be on The Bachelorette

Thanks to numerous tipsters, the buzz around the courthouse is now confirmed -- Assistant United States Attorney Mike Garofola will be a contestant on the new season of The Bachelorette.  He will be competing with two dozen other men for the love and affection of Desiree Hartsock.

He's used to competing, beating out hundreds of applicants for a federal clerkship and then a job at the United States Attorney's Office.  And as a trial lawyer, he's used to performing for an audience.  So he stands a good chance.


Here's a picture of AUSA Garofola from one of the upcoming episodes in which the contestants play dodgeball: 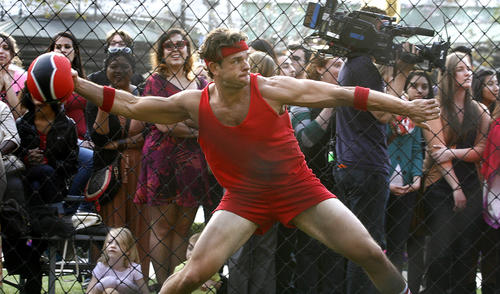 
I asked the U.S. Attorney's office for comment, and Alicia Valle on the office's behalf said: "We wish him luck."  I like that they were good sports about it.

UPDATE -- the initial post had his name misspelled.  It has been corrected, I hope.

UPDATE #2 -- some additional pictures of Mike:

Posted by David Oscar Markus at 10:00 AM

Well, this is one way to deal with the furlough issue.

The Bacehlor/Bachelortee is entertaining but embarrassing. Women/men publicly humiliating themselves on national television. The women are the worst. They are borderline psychotic, fighting as if the bachelor is the only man on the planet left. I've watched every season and the story line has been consistent: get a bunch of attractive, neurotic young women together and watch them in all their melodramatic glory as they fight for the affection of a guy who’s making out with all of them at the same time. What could go wrong? There’s always that one woman who’s been hiding her secret boyfriend back home and the woman who just can’t seem to get along with the other girls. I will never understand how every single one claims she/he has fallen madly in love with the bachelor/bachelorette, and why they’re so utterly shocked and confused when they get sent packing. They all have the same spiel: “I was so in love, I just didn’t see this coming.” What do you mean you didn’t see this coming? You signed up for the show fully knowing that 24 out of the 25 contestants would be eliminated. How many of the the relationships have lasted? None except for Trista and Ryan. I can’t possibly be the only one who’s noticed the show’s increasing level of superficiality.

Hector F, Yan, or lou Guerra would beat that dude out in a heartbeat

Now you're like Rumpole's blog which had a disgusting discussion last weekend on the Seeking Arrangements website where older men pay young women for whatever.

Leave the sex and babes discussion for the other legal blogger. We all know he is the go to guy.

627 pm - the only thing more pathetic than the show is people like you who "watch every season" and spend any time analyzing it as you do . Get a life.

6:27 p.m.: the fact that you have watched every season of that shlock show is all we need to know. You are brain dead and punch drunk so you are excused from your serious attempts to actually review that show! You must be a former federal public defender.

I heard he got in trouble last year for using dating websites while at the U.S. Attorney's office.

Why would someone get in trouble for using a dating website while working as a federal prosecutor.
On the other hand, if there is a rule requiring all AUSAs to wait until marriage, I guess that would explain a lot.

This guy should be fired for going on that show.

Found this on some random blog:

Occupation: Assistant U.S. Attorney practicing out of the Southern District of Florida.

By the way, he looks good

I know Mike and he's a good guy, but he didn't take his job seriously. The OkCupid incident didn't help his rep at the office – he was browsing around for dates during office hours. While the rest of us were slaving away.

I bet Fred Moreno is cringing in his chambers right now. Or will be, if he finds out about his former clerk's trashy Reality TV debut.

I, for one, will be watching the Bachelortee this season.

I invite you to reread your stupid comment and please explain how "waiting until marriage" is relevant to anything because your comparison makes no sense whatsoever. He got in trouble because he was checking out chicks for hours at a time on dating sites during office hours while the rest of us were working. It's not a big deal to check your personal email or whatever, but browsing online while you should probably be working is unacceptable. I guess being part of this show is clear evidence of where his priorities are when it comes to his career.

Make us proud Mike! If you're the runner-up you get your own show, tons of emotionally unstable hot babes vying for your attention, and a chance to dance on Dancing With The Stars.

Obviously Mike slipped through the cracks to get hired by the US Attorney's Office. They usually are interested in brains before looks. He appears to be brain dead and won't be with the office much longer. I hear he is looking to join the Federal Public Defender's Office so he will have more time to devote to his outside interests.

Hello, men are more psychotic on The Bachelorette than The Bachelor, fighting, insulting each other, etc. for the affection of a girl who's making out with them at the same time.

tell us more about the OkCupid incident?

Strange that someone in his position would even need to go on TV to get a date. Unless he's soon to be -- or is? -- out of a job?

I also know Mike. He is a good guy and slaves away like the rest. The OkCupid incident concerned replying to a couple of messages via the app on his phone, like responding to a text, not wasting the day looking for dates. The powers-that-be were not the least bit upset and his rep has not been affected, as far as I know.

Does anyone know if he gets a Hometown Date? It should be filming sometime this week.

Anyone else find it ironic that people who work at the U.S. Attorney's Office, who are posting comments on this blog during office hours, are also criticizing this guy for being on a dating website during office hours? Pot calling the kettle black?

Is he back home yet? Or was he eliminated?

Should be a fun season. We have the names of the winners posted now. Final four and who Desiree picked. Mike goes home pretty early!
http://www.BacheloretteBlog.net

Oh Mike.... This is a new low point for you. Not entirely unexpected, though.

Ps: One is not being reprimanded if "the powers-that-be were not the least bit upset."

Michael G for the next bachelor!!!

I have to say I think Michael is every woman's dream guy...at least mine. He deserves the best! If he was in my hometown I would ask him out. Oh! if I was on the show I would gather all the roses and tell him he is the one. Why can't I find someone like him?

Michael is THE BEST guy of the whole bunch. I wish I could date him!!!!!!

Handsome looking Ausa.. you got some great talent. Would love to meet a great guy like this. Any other ausa'ss looking for a great lady?

I am deff finely interested in Michael, I have watched this show and want to meet him.

I am so into this guy I wish there was a way to meet him or contact him.

I think he's hot, and i'm a straight guy. He shoulda made it to the final 4.

God some of you are amazing you can't tell me that one time in your life you have not checked a dating site or a text msg or missed phone call from the opposite sex and if not either your boring lying or gay. Give the guy a break everyone should have that one person to be with and frankly it amazes me that you have nothing better to do is bash on him and his choice to find love. I would go to the ends of the earth to find it. Call me crazy frankly I don't care. In fact I have spent the last 2 hours trying to get Mikes contact info. I am sure you want to know is from all the qualities Mike have and possess are all qualities I would want in my partner. So with that said anyone that knows him here is my email address I would love to chat with him because I know a good catch when I see it. Jstevensphd@yahoo.com