This one should be interesting.  The feds aren't happy with the way Bal Harbour is spending its forfeiture loot.  From the Herald:

The U.S. Justice Department shut down Bal Harbour’s celebrated federal forfeiture program and ordered the police to return more than $4 million, slapping the agency with crushing sanctions for tapping into drug money to pay for first-class flights, luxury car rentals, and payments to informants across the country


After years of seizing millions from criminals, Bal Harbour’s vice squad is now banned from the federal program that allowed the village police for years to seize cars, boats, and cash — and to keep a cut of the proceeds.

In a scathing letter to Police Chief Thomas Hunker, federal agents are demanding the prompt surrender of the millions reeled in last year by a team that operates from a police trailer just blocks from the opulent Bal Harbour Shops.

For years, the small coastal town known for speed traps became one of the most successful in Florida, with plainclothes cops jetting across the nation toting bags stuffed with cash from investigations that had no connection to Bal Harbour — and making few arrests.

The findings, released on Tuesday, were also sent to Mayor Jean Rosenfield, who could not be reached for a comment.

The action by the DOJ’s criminal division comes after a lengthy investigation that began last year with an audit and escalated into a deep probe that turned up a host of problems, including questionable expenses, hundreds of thousands paid to snitches, and missing records.


With all that money, the po-po could've bought this $3 million Matisse ("Odalisque in Red Pants") for their lobby: 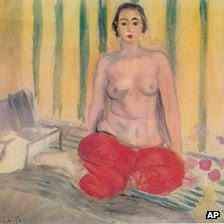 Actually the pair that stole it (Antonio Marcuello Guzman and Maria Martha Elisa Ornelas Lazo)
pleaded guilty yesterday, and sentencing is scheduled for January 22.  How much do you get for trying to sell a stolen painting worth millions?  More or less than Gupta's 2 years?
Posted by David Oscar Markus at 8:29 AM