Most quotable AND best dressed 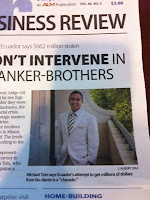 "Their lawsuit is like Castro trying to seize Miami homes from families who fled from Cuba. Their lawsuit, if they win it, will create a precedent that Castro and Chavez can come in and sue every political refugee in Miami and seize their houses." That's Mike Tein on the cover of today's DBR. Plus I love the suit, but could never pull it off.

In other news, the Supreme Court really means what it says in the Confrontation Clause cases. From the WaPo:

The constitutional guarantee that a defendant be able to confront his accusers means prosecutors must produce even the technicians involved in the specific laboratory tests used in his trial, the Supreme Court ruled Thursday.

In a case involving a drunken driver from New Mexico, a majority of the court reinforced its recent decisions that fortified the right of defendants to cross-examine witnesses, established in the Sixth Amendment.

The rulings have scrambled the court’s usual ideological pairings, with Justices Antonin Scalia and Ruth Bader Ginsburg the most vigorous defenders of defendants’ rights in such circumstances.

Ginsburg wrote Thursday’s opinion, which said defendant Donald Bullcoming should have had the opportunity to cross-examine the lab analyst who provided the main evidence in his trial: a lab report showing his high blood-alcohol level. New Mexico prosecutors instead had called another analyst who had no role in performing the specific test.

“The Sixth Amendment does not tolerate dispensing with confrontation simply because a court believes that questioning one witness about another’s testimonial statements provides a fair enough opportunity for cross-examination,” Ginsburg said.

Scalia and Justices Clarence Thomas, Sonia Sotomayor and Elena Kagan agreed with the decision, but only Scalia joined Ginsburg’s opinion in full.
Posted by David Oscar Markus at 9:20 AM

Why don't start a new poll: whose David Markus's favorite member of the legal profession?

Why no pic of the lawyers who actually won on the merits? I guess pithy quotes carry the day on this website. Congrats to Alvin Davis and his team!

I thought the Kentucky Derby happened a few weeks ago.

Guys: I'm not going to put the nasty comments up. Sorry. --dm

DM you are a sell out. The 1st amendment has no place when friends are involved, is that it?