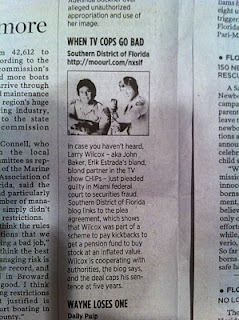 Pretty cool. Meantime, I can't get the CHiPs theme song out of my head.
Over the weekend, Jay Weaver profiled Eric Bustillo, the SEC chief. It's a nice piece. Here's the intro:
A product of Jesuit schools in Latin America, Eric Bustillo entered Tulane University in fall 1981.
Within months, his bright future would take a dark turn: He and his friends were returning to the New Orleans campus one night when their car swerved to avoid another and slammed into a tree. Bustillo's spinal cord was severed, leaving him paralyzed.
Today, as he sits in a wheelchair in his corner office overlooking Biscayne Bay, Bustillo displays only optimism. A lawyer for more than 20 years, he is director of the Miami regional office of the U.S. Securities and Exchange Commission, in charge of protecting investors in a region riddled with fraud, from old-fashioned boiler rooms to newfangled Ponzi schemes.
``I could have wallowed in my misfortune, or worked hard, educated myself and not let it become an obstacle,'' said Bustillo, 45, born in New Jersey to Cuban exile parents who moved the family around to Venezuela, Panama and other countries.
Posted by David Oscar Markus at 9:15 AM

CHiPs is way cooler than Luther Campbell, so you win this round.